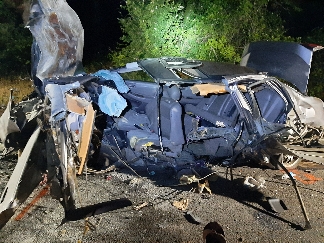 On Thursday, July 2, 2020 at about 11:40 p.m., a single vehicle roll over crash was reported to dispatch, in the 1500 block of Perrydale Road, Dallas, Polk County.  It was reported there was a subject in the vehicle and that the vehicle was on fire.  The Polk County Sheriff’s Office arrived and with assistance by citizens on scene, extricated the passenger, due to the engine compartment being on fire.  The male driver, 24-year old Azaiah Stephenson, of Dallas, Polk County, had been ejected during the crash and was pronounced deceased at the scene.  The male passenger, 31-year old Philip Vigil, was transported to Salem Hospital, where he was being treated for suspected non-life threatening injuries.  Mr. Vigil is also a resident of Dallas, Polk County.

The roadway was shut down for about 6-hours, opening back up just shortly after 6:00 a.m. on Friday, July 3rd.

The investigation is ongoing; however, it was apparent Mr. Stephensen had been traveling northbound on Perrydale Road, when he left the roadway, for unknown reasons, ending up in the opposite ditch.  Mr. Stephenson then struck a culvert and tore the driver’s side of his vehicle open, causing him to be ejected.  Due to the extensive damage to the vehicle, it appears speed was a contributing factor.