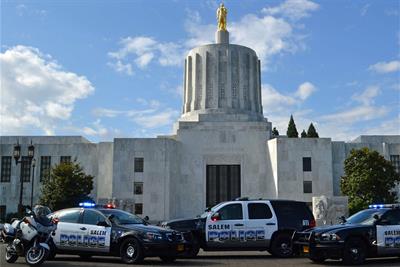 Salem, Ore. – On Friday, January 1, 2021, two groups with opposing ideologies scheduled protests in Salem in separate locations. The event at the Oregon State Capitol was organized by Oregon Women for Trump and was heavily attended by affiliates of the Proud Boys. Many of the attendees at the state capitol were armed with various weapons, knives, chemical sprays, batons and firearms. The event at Bush’s Pasture Park was organized by self-identifed anti-fascists who were also armed with a variety of weapons including firearms.

The Salem Police Department, along with the Oregon State Police and the Marion County Sheriff’s Office, worked cooperatively to provide an enhanced presence in and around where the protests were to be held with the goal of ensuring those who gathered were there to do so peacefully. With the potential for these events to be disruptive to nearby neighborhoods and interfere with vehicular traffic, an educational campaign to alert neighborhoods and motorists to the event was proactively released. In addition, officers contacted or attempted to contact the organizers of both events to educate them on our objectives for a safe and successful event, as well as provide information on what actions could result in law enforcement action.

At approximately 2:00 p.m. the protestors at the state capitol began an un-permitted march to Mahonia Hall on Lincoln ST SE. As the march proceeded, many people walked in the street and blocked intersections at which point they were advised their actions could have enforcement consequences. Protestors arrived at Mahonia Hall where a contingency of Oregon State Police troopers and Salem Police officers remained present. At the conclusion of their protest, the group began marching back to the state capitol. A small group of Proud Boys broke off from the main march toward Bush’s Pasture Park where a small group of anti-fascist protesters were still gathered. Salem Police quickly moved officers and equipment into the park to keep the two rival groups from converging and prevented a potentially violent encounter.

At approximately 4:00 p.m., Proud Boys and associates returning to the state capitol approached a group of individuals who were armed with bats, paintball guns and firearms standing in front of a building near High and State STS. A heated verbal exchange ensued between the two groups. With the goal of keeping opposing groups apart, crowd management officers quickly responded to quell the dispute and keep the groups separated. Neither group complied with initial dispersal orders and Proud Boys affiliates had to be forcibly moved back from the business by officers. Officers also had to move the business group back toward the business to keep them from repeatedly interfering with enforcement actions on State ST.

Once enough law enforcement resources were in position to safely deal with the groups, the growing crowd was informed via loudspeaker the gathering was an unlawful assembly. The declaration was given because the crowd no longer appeared to be protesting but was instead attempted to instigate fighting and tumultuous behavior. When officers attempted to push the crowd back, they were met with physical resistance and smoke grenades.

It took approximately one hour, most of the officers assigned to the event, and the utilization of physical force and less-than-lethal munitions to move the crowd out of the streets and back to the state capitol. Three people were taken into custody for their actions during the declared unlawful assembly.

The objectives set for the day were the protection of life, protection of property, keeping opposition groups apart to prevent conflict, enforcement of crimes including minor infractions when appropriate and reasonable, and conducting follow up investigation of crimes which could not be dealt with immediately. There were no reported injuries, loss of life, or damage to property during this event, and the following arrests were made:

Additionally, officers issued one violation citation during the event for failure to display license plates and an equipment violation.

The Salem Police Department will continue to investigate events which took place during the protests and additional violation and criminal citations may be issued as a result of those investigations.

About the events Salem Police Chief Trevor Womack shared the following statement, “Yesterday our officers, and those from our partner agencies, were faced with extremely dangerous and challenging situations. I am proud of the discipline and professionalism exhibited by our teams. While most attendees seemed intent on peacefully demonstrating, a subset from each group were in fact seeking confrontations and conflict with opposing groups and the police. This is where the challenge ultimately lies – we must protect the rights of those peacefully assembling while simultaneously working to stop the few individuals intent on jeopardizing community safety up to and including acts of violence. My staff performed exceptionally well, as evidenced by the fact no injuries nor property damage was reported. We will always welcome, encourage, and protect the rights of groups peacefully assembling, regardless of their views, but we cannot and will not allow individuals to commit serious crimes without consequence.”

We recognize how disruptive these protests can be for the non-participating community and thank them for their understanding and patience in these matters.