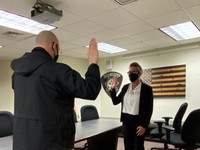 On March 8th, 2021, Sheriff Joe Kast promoted the Community Corrections Division’s newest Lieutenant, Anna Jefferson. Lt. Jefferson was born and raised in Sweden and began her career with the Sheriff’s Office in 2000 as a volunteer with Community Corrections. She was hired full-time as a Parole and Probation Deputy in 2004 where she worked with a wide range of clients through Drug Court, the General Supervision Unit, Alternative Incarceration Program and in the Student Opportunity for Achieving Results program better known as S.O.A.R. While still a deputy, Lt. Jefferson helped with the implementation of Mental Health Court in Marion County. In addition to her duties as a Parole and Probation Deputy, she has served as a SWAT Negotiator and as a long-time member of the Marion County Sheriff’s Office Peer Support Team. In 2014, she was promoted to the rank of sergeant were she supervised prison diversion and prison re-entry programs for Community Corrections.

Sheriff Joe Kast stated, “Anna is one of the most genuine people you will ever meet. It doesn’t matter whether you are talking about clients or peers, she consistently goes out of her way to help others and bring out the best in them. Her passion for helping others is inspiring.”

In her new role, Lt. Jefferson will be assigned to oversee the Marion County Sheriff’s Office Transition Center.