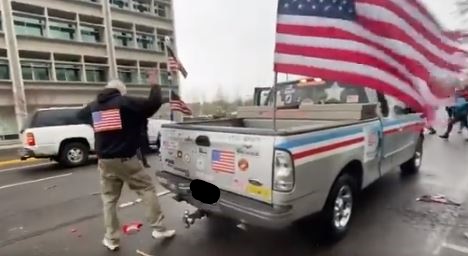 On Sunday, March 28, 2021, events were held by two separate groups intending to meet at the state capitol grounds. The Oregon State Police along with our partner agencies the Salem Police Department and the Marion County Sheriff’s Office were actively monitoring the protests.

The following individuals were arrested and lodged at the Marion County Correctional Facility on charges related to criminal activity during today’s event:

These are open criminal cases and will continue to be investigated. Anyone with information related to these incidents or any other criminal acts which took place today, March 28, 2021, are encouraged to contact the Salem Police Department tips line at 503-588-8477.

The Oregon State Police would also like to clarify misinformation regarding the circumstances around the man who was detained after displaying a firearm.

The person in the photo was the victim of extensive damage to his vehicle.  When he stopped to assess the damage, he was assaulted with pepper spray.  After being assaulted with pepper spray, the person pulled a handgun from his waistband to defend himself.  He did not point the weapon at anyone and dropped it when ordered to do so by Law Enforcement.  This person has a valid concealed handgun license. This person was detained, interviewed and then released.  Reports will be forwarded to the Marion County District Attorney’s Office for review.