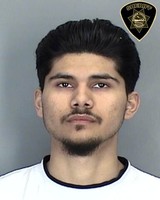 Salem, Ore. — On the afternoon of Saturday, March 13, 2021, Salem Police patrol officers responded to multiple reports of gunfire along the 3400 block of Williams AV NE. Callers reported an exchange of gunfire between two groups of juveniles which subsequently fled the area.

Responding officers searched the neighborhood for victims and contacted witnesses. Although no victims were located, officers found 9mm casings and damage to a fence and a vehicle parked at a residence. Detectives assisted in the incident and were able locate witnesses and video of the incident. Through the course of the investigation, Anthony Gonzalez, was identified as one of the individuals involved.

Gonzalez was apprehended without incident on March 26, 2021. At the time of his arrest, the 18-year-old Gonzalez was in possession of a 9mm handgun and wearing the same clothing as displayed in the video of the incident. Gonzalez was lodged at the Marion County Correctional Facility on the following charges:

Gonzalez is scheduled to be arraigned on an indictment at the Marion County Circuit Court annex on April 7, 2021 at 8:30 a.m.

Gonzalez’s successful apprehension was possible because of great police-community teamwork. Thanks to the investigative leads provided by witnesses and video, patrol officers and detectives were able to piece together the critical information which led to the arrest.

Residents in this area of northeast Salem have seen an increase in shooting incidents in recent months. Follow-up investigations into these occurrences continue, as well as the increased presence of both uniform and non-uniformed patrols throughout the affected neighborhoods.