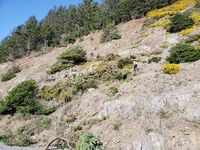 SALEM, Ore. – The Oregon Department of Forestry is putting to work the $5 million it was granted in January by the Oregon Legislative Emergency Board (E-Board) for reducing wildfire risk. The agency has lined up 37 projects that rely on partnerships to improve community resilience to wildfire and restore and maintain healthy, resilient forests. The projects are spread evenly on both sides of the Cascades. Most of those in western Oregon – 16 out of 19 projects – are concentrated from Lane County to the California border, where wildfire risk near populated areas is generally higher.

“The funds from the Emergency Board provide the state with an incredible opportunity to bring together public and private groups to complete some critical fuels mitigation work in advance of the 2021 fire season,” said Oregon State Forester Peter Daugherty. “This is shared stewardship in action. When we work together, we can treat more acres across ownership boundaries and have a greater impact on fire resiliency in communities and forests throughout the state.”

Polk and Benton Counties will receive about $78,000 of spending toward two fuels reduction projects on private lands in the two counties.

The first project involves Greater Polk County Wildfire Resilient Forests. The E-board grant allows ODF to fund a few projects that the federal Natural Resource Conservation Service (NRCS) was not able to fully fund. Relying on earlier collaborative efforts, ODF was able to pull shovel-ready projects off the shelf for implementation. This included two large tracts in Polk County that NRCS had already organized, with the assistance of ODF stewardship foresters, to promote forest health and resilience and reduce fire hazard through thinning of overstocked stands and slash treatment projects (chipping).

The second is a continuation of fuels mitigation work begun in 2017 under a USDA Forest Service Western States Fire Managers grant. That work will be carried on at several locations in both Polk and Benton counties, including Dallas, Gooseneck Road, Soap Creek, Gold Creek, Mill Creek and Trillium.

After receiving the funds in January, ODF put out a call for proposals and received 93 applications totaling over $20 million. The 37 projects were chosen from among those applications.

ODF expects that the projects collectively will result in:

Some 35 of the 37 projects involve direct treatments on the land. ODF and its partners will employ various fuel treatment methods ranging from ODF fuel crews, landowner cost shares and rebates and/or contracted equipment services.

In addition to funding fuel-treatment projects, ODF is directing investments to increase its organizational capacity, including equipment and full-time staff.

Burns said the field positions allow ODF to keep seasonal firefighters engaged outside of peak fire months. “That’s already paid off in central Oregon because we had trained firefighting staff doing fuels treatment work when a large wildfire was reported in late March. They were able to join the response, adding to our initial attack capability even as they reduce potential fire intensity with their fuels treatment.”