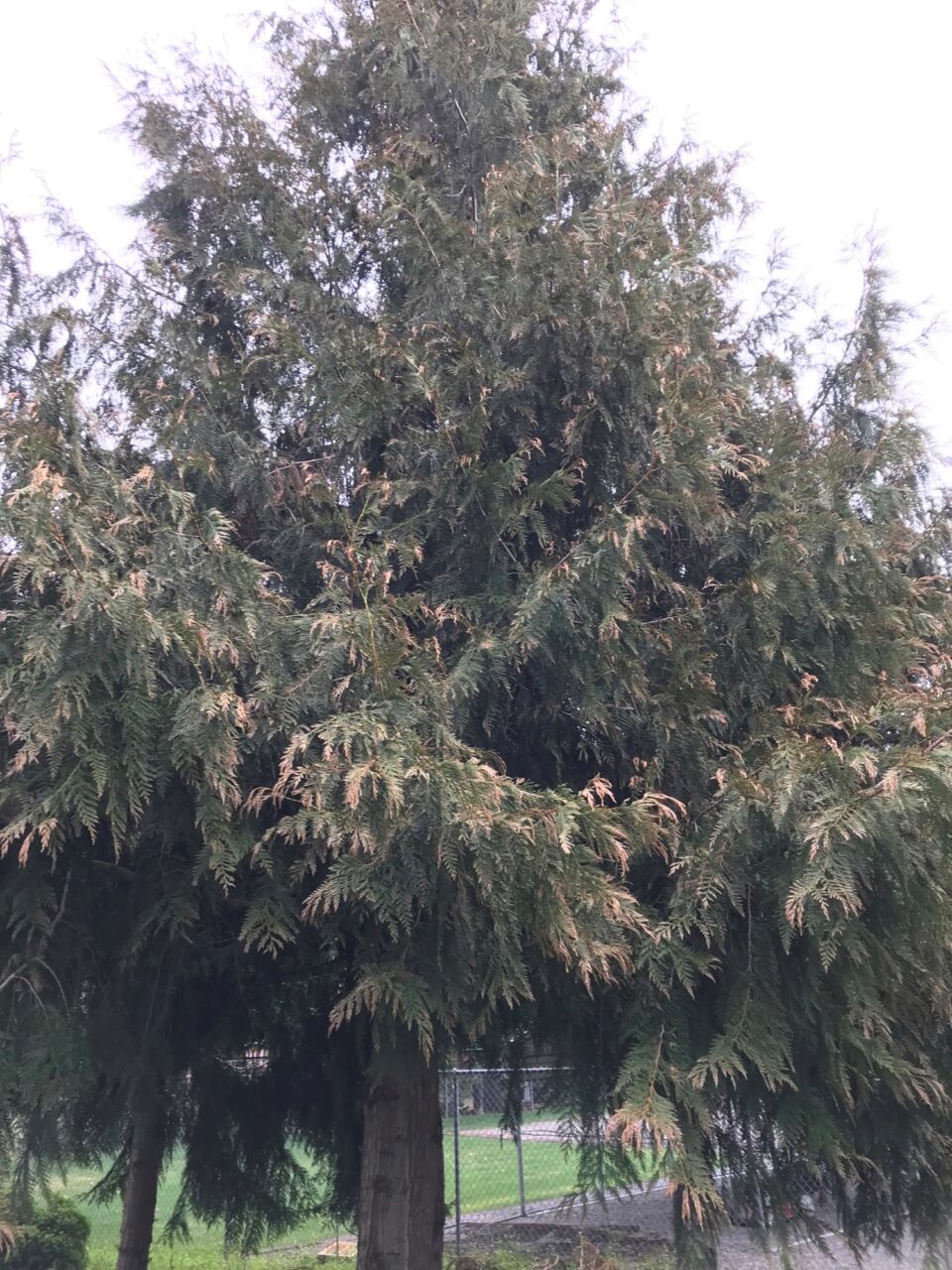 SALEM, Ore. – What Oregonians may not have noticed while huddling inside during this week’s extreme heat was the damage those triple-digit temperatures may have been having on their trees. Some of that damage, such as wilting and scorching, will be obvious right away. But other harm may be less easy to spot just from looking.

Christine Buhl, PhD, is a forest scientist with ODF’s Forest Health Team. An expert on insect damage to trees, for years she has looked at trees with visible symptoms of decline and had to sort out what’s causing the damage – insect pests or environmental factors. The two main environmental factors are drought and excessive heat like what gripped the state this week.

“I’m seeing more and more the toll the long-term drought in Oregon is having on trees,” Buhl said. “Even trees that usually tolerate drought well are becoming stressed as we see the years with below-average rainfall start to outnumber those with good amounts of rain.”

When trees are drought-stressed, they cannot mount a strong defense against insect pests like bark beetles. “It may look like the insects are to blame but the underlying cause is the drought weakening the trees defensive capabilities,” said Buhl.

Buhl explains that – depending on species and local conditions – above about 95 degrees Fahrenheit, trees may pass more water from their leaves to the air than they can pull from the soil with their roots. This can cause air bubbles to form in the channels leading from the roots to the leaves. Those bubbles break the chain of water molecules that are required to keep water moving upward through a tree.

“This breaking is called cavitation. Once that happens, parts of the tree above the bubbles don’t get water and start to dry out and die,” said Buhl.

Another response to high heat is that trees start closing the openings in their leaves to limit water loss.

“This shuts down a tree’s ability to photosynthesize. So it is no longer able to make food until temperatures cool a bit,” said Buhl. “This weakens them and stunts their growth. It can also make it easier for pests to overcome their defenses.”

It’s important during a drought and especially during a heat wave to make sure trees are well watered. But watering alone can’t prevent cavitation, leaf scorching or sunscald on thin-barked trees.

“There’s little forest landowners can do when temperatures soar into the 100s,” Buhl said. “But city dwellers may be able to shield young trees from direct sun by rigging up temporary shade tarps until the heat wave passes. That will lower the temperature slightly and protect thin bark from scalding, such as on red maples, Japanese maples, and European beeches.”

Buhl also recommends people mulch the area around their trees. She recommends people remove competing grass and weeds and lay down 2 to 3 inches of mulch to keep the root zone of a tree cool and slow evaporation from the soil. Do not pile mulch against the trunk, however, as it can lead to disease problems.

“People in western Oregon are becoming less able to rely on rainfall alone to get their trees through our summers,” Buhl said. “With the exception of a few drought-adapted natives, such as Oregon white oak and Willamette Valley ponderosa pine, to have healthy trees now we have to give them supplemental water at regular intervals. And hope we don’t have triple-digit temperatures too often.”

For more detailed guidance on how to water trees and how much to give, visit the Arbor Day Foundation at https://arbordayblog.org/treecare/how-to-properly-water-your-trees/