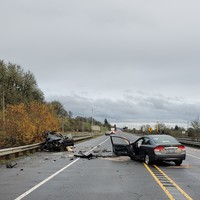 On Wednesday, December 15, 2021, Oregon State Police Troopers responded to assist Grand Ronde Tribal Police with a vehicle pursuit of a black Honda Civic eastbound on Hwy 18. The suspect was involved in a Theft and Unlawful Entry into a Motor Vehicle in Lincoln City.

As Grand Ronde Police pursued the vehicle, the suspect attempted to run multiple officers off the road and drove into oncoming traffic. This reckless driving behavior ultimately caused Grand Ronde Tribal Police to terminate the pursuit.
Oregon State Police Troopers, who had been staged at milepost 34 to assist with the pursuit, observed the suspect traveling at a high rate of speed. The suspect vehicle then veered into the westbound lane in order to pass a vehicle and collided head-on with a silver Honda Civic.

Immediately following the crash, the suspect driver, identified later as William Hall (29) of Salem, fled on foot. Troopers pursued Hall who ran north towards Hwy 18B where Hall stopped a white SUV and attempted to enter the vehicle but was unable to do so. The foot pursuit continued, and Troopers were able to take Hall into custody without further incident a short distance further.

Oregon State Police investigators are seeking witnesses to the crash and the driver of the vehicle Hall attempted to enter on Hwy 18B.  If you have information, please contact the Oregon State Police at 1-800-442-2068 orOSP (677). Reference Case #SP21-347776