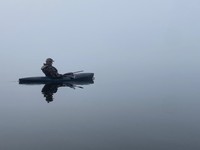 2021 was a safer boating year than 2020, says the Oregon State Marine Board, but the number of fatalities was still above historical levels. “We’re headed back in the right direction,” says Randy Henry, Boating Safety Program Manager for the agency. “But it would be a great resolution for more boaters to simply wear their life jackets in 2022,” he adds.

Henry completed an annual review of the 2021 boating season’s 19 fatalities, which is an improvement over 2020’s 26 boating fatalities. “We continue to see a large and growing diversity of boaters on Oregon’s waterways,” says Henry. “They were crowded, people were having fun and the types of watercrafts just kept increasing. Boating is a healthy outdoor recreation activity, but we need to step back and talk safety.”

“Fatalities occurred in all types of waters in 2021, in all types of watercraft, and across all age ranges,” says Henry. Victims ranged in age from five to 79, occurred in the ocean, inland rivers, large and small lakes and reservoirs. Half the fatalities were in non-motorized or small electric-powered boats, but others were in larger boats designed for open water. “This reminds us that everyone needs to be prepared no matter who they are or where they are boating,” says Henry. “While life jackets are a great backup, they don’t prevent the incident that led to its need, so you also need to consider weather, tides, and your own skill level before venturing out.”

The number of coastal fatalities was high this year, with three, double-fatality incidents occurring in the surf zone or at coastal bar crossings. “These involved swift outgoing tides, unexpected breakers and apparent equipment problems or falls-overboard,” says Henry. “Coastal waters are unforgiving. You must be aware of the tide, weather, ocean conditions and where jetty or reef hazards are located. It takes skill and practice. The ocean always deserves your utmost respect,” adds Henry.

For the second year in a row, Henry notes that several young children died in boating incidents. “One involved a child in a small inflatable raft on the edge of a river who was not wearing a life jacket, and the other was entrapped in a capsized boat with a life jacket on,” said Henry. “It breaks your heart to see these incidents. Occasionally there is an incident where the life jacket isn’t enough, but most of the time, it is. Parents should always put their child in a life jacket, even if just playing on a tube or small inflatable boat at the edge of a pond or other waterway. Things happen so fast.”

Five of the 2021 boating victims were wearing life jackets, which is somewhat high. “Life jackets absolutely save lives, but they’re not a guarantee,” said Henry. Four of the victims wearing life jackets were caught in surf situations, with two of those suffered significant injuries and two were entrapped in the cabin of a capsized boat. The fifth victim had a medical event that contributed to their death.

Henry noted that the number of female victims was double the 10-year average in 2021, at 31 percent. “Nearly one-third of our boating fatality victims were female,” says Henry. “US Coast Guard data from the 2019 National Life Jacket Wear Rate Report shows that the percentage of women actively boating increased five percent in the last 10 years and is now at nearly 40 percent of all boaters. Thus, we would expect to see the proportion of female fatalities increase.”

The average age of boating fatality victims this year was 49, within a point of last year, Henry says.

“This annual review is always sobering,” says Henry. “When you look at the individual incidents, you see so many that could easily have been prevented if the operator had taken a very simple, basic safety precaution, such as waiting until the outgoing tide cycle finished, wearing a life jacket, or checking the weather.  Safe boating is easy if you take the time. That’s the take-home message.”

Recreational boating data and annual summaries are available from the Marine Board’s website.