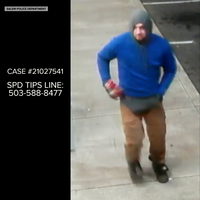 The first robbery occurred on December 13, 2021 when the male suspect displayed a gun to the shop clerk and demanded money from the register. The employee complied and the suspect left on foot. Then on December 18, 2021, the male suspect again displayed a handgun to the shop employee and demanded money. Once the suspect took the money, he fled on foot. Patrol officers searched and perimeter tracks were conducted by a K-9 team after each incident but were unsuccessful.

Employees provided the following physical description of the suspect:

In the December 13 incident, the suspect was reported as wearing a black jacket with large front pockets and dark pants, both described as being in a dirty condition, and dark shoes. On December 18, the suspect’s clothing description included a blue sweatshirt over a dark hooded jacket, dark tan pants, red mittens, and dark shoes.

Detectives are working all available leads and now ask for the public’s help in identifying the suspect in these armed robbery cases. If a member of the public knows the individual in the photograph and video, or has information about the cases, please call the Salem Police Tips Line at 503-588-8477.