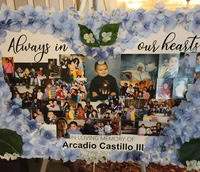 Salem, OR:   A new wrongful death lawsuit was filed today in the U.S. District Court of Oregon, against Salem police officer Nathan Bush and the City of Salem, for the fatal shooting of 23-year-old Arcadio Castillo III, a young man with a history of mental illness and related abuse of marijuana and alcohol.  Castillo was killed in his family home on the night of July 9, 2021, after Arcadio assaulted his mother and she called the Salem police department for assistance. She reported the facts of his mental illness to the 911 call taker in a desperate attempt to de-escalate the crisis.

Instead, when Salem police officer Bush arrived on the scene, he drew his duty weapon, rushed into the home, commanded Castillo to drop the kitchen knife he was holding and without allowing adequate time for Castillo to comply, fired four rounds at Castillo, killing him while his father looked on helplessly from a few feet away. Bush did not announce his intent to enter the Castillo residence nor issue a verbal warning that he intended to shoot before firing all four gunshots directly into Castillo’s upper torso. Less than two minutes from his arrival on the scene, officer Bush announced the fatal “shots away” via radio, just as two responding cover officers arrived on the scene.

Salem Police Department enhanced policy directives and training now reinforces the use of cover officers when responding to incidents involving mental health crisis where the presence of a weapon is likely.  As of last month, Salem PD reported their intent to supply officers with body cameras by summer, to help track data on their crime response and offer more thorough training dedicated to use of force and de-escalation.  Salem Police Chief Trevor Womack also announced that he expects 20 or 30 officers to complete 40 hours of crisis intervention training in 2022.  In Castillo’s case, officer Bush had no department-issued body camera, nor did he wait for back-up officers before choosing to confront and shoot Arcadio.

The lawsuit seeks justice for the Castillo family by holding the City of Salem and officer Bush accountable, in part, for their failure to use life-saving crisis intervention tactics and training, including verbal de-escalation techniques, distraction, time and distance, before resorting to deadly force.

Castillo’s parents had been actively pursuing assistance from the Marion County Mental Health department in the weeks prior to his death, trying to secure help and have their son committed on the basis that he was a danger to himself and others. The Salem Police had previously responded to nine separate domestic disturbance calls at the Castillo home in the year leading up to the shooting, all directly related to Arcadio’s mental and substance abuse disorders.

“The Castillo family is devastated by the tragic and preventable loss of their son,” said attorney Ron Sayer, “They reached out for help to those sworn to protect and serve. We hope this case shines a light on the dire need for police departments to utilize behavioral health and crisis negotiation officers when responding to community members experiencing mental health crises. Lives depend on this critical training and the judgment, skill and discipline of officers to apply it.”