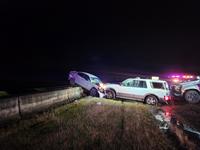 On November 30, 2022, at approximately 10:20 P.M., Oregon State Police Troopers were in a short pursuit of an SUV that was driving recklessly on Interstate 5 southbound at milepost 253 around Jefferson, Oregon.  The SUV made an erratic U-turn and began to travel northbound in the southbound lane before intentionally ramming an OSP Patrol car.

The driver identified as Garrett W. Hall (50) from Portland was transported to an area hospital with minor injuries.  He was subsequently arrested and lodged in jail for Reckless Driving, Felony Elude, and the Assault of a Public Safety Officer.

The OSP Trooper was also transported to the hospital with minor injuries.

We are grateful that the Oregon State Police Troopers were in the right place at the right time to intervene for the public’s safety.