Oregon Ducks Accept Bid To Play in the Redbox Bowl 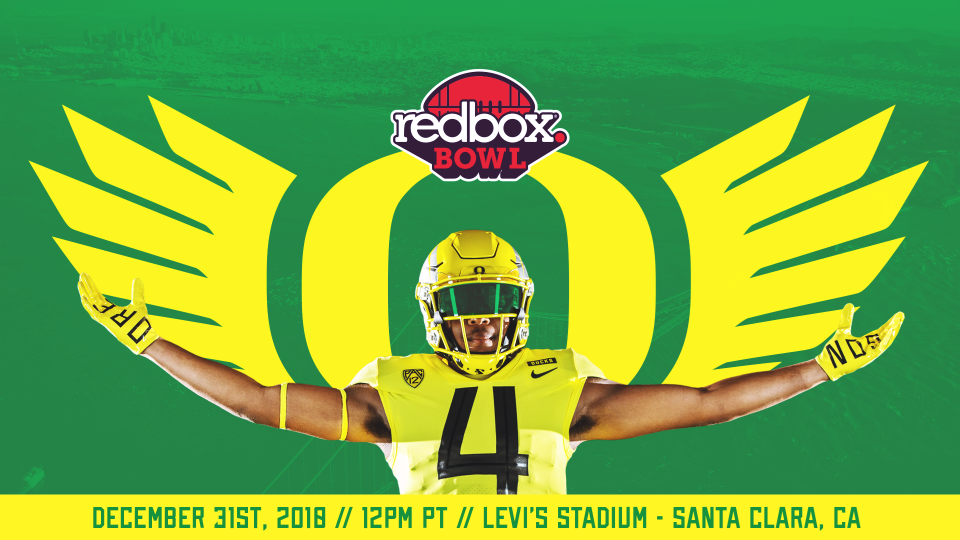 The Oregon football team on Sunday accepted a bid to play on New Year’s Eve in the Redbox Bowl, against Michigan State in Levi’s Stadium in Santa Clara, Calif.

The Redbox Bowl will kick off at noon on Dec. 31. FOX will provide a national broadcast.

Tickets can be purchased from the allotment for Oregon fans via this link.

The Ducks enter the postseason after going 8-4 in the regular season, and riding a two-game win streak after victories over Arizona State and Oregon State. They’re returning to California for their bowl game for the first time since the Rose Bowl following the 2014 season, the last UO bowl victory.

Oregon is making its 32nd bowl appearance, and playing for the 12th time in California. The Ducks reached the postseason for the 13th time in the last 14 seasons, and did so in their initial season playing under Cristobal.

The Redbox Bowl is being contested for the 17th time, but the Ducks will make their first ever appearance in the Bay Area game.

Oregon’s players are about to enter finals weeks at the university, and also are going through workouts individually and in small groups. The Ducks will hold their first formal Redbox Bowl practice on Dec. 14, Cristobal said.

The UO coach said he expects Justin Herbert and Jalen Jelks to play in the bowl game after injuries limited them during the Civil War. Offensive lineman Penei Sewell, offensive lineman Steven Jones and linebacker Isaac Slade-Matautia are expected to return from extended absences for the Redbox Bowl, and Cristobal said running back Tony Brooks-James and linebacker Kaulana Apelu hope to resume practicing once the Ducks are in the Bay Area the week of the bowl, in hopes of participating in the game.

Cristobal said that “I don’t have any indications (a current UO assistant) will miss the bowl game or is going anywhere else.” But he acknowledged that this is the time of year when coaches might interview for other jobs, and said that, “if they have opportunities, I encourage them to.”

Oregon and Michigan State will play for the seventh time, and for the first time in the postseason. The Spartans went 7-5 in the regular season, including a loss to Arizona State of the Pac-12.

“They are what we all know of Michigan State and their history, just a physical, big football team, with some very explosive players,” Cristobal said.

In a battle of teams ranked in the top 10 nationally, No. 3 Oregon handed No. 7 Michigan State a 46-27 loss on Sept. 6, 2014. The Ducks outscored the Spartans 28-0 in the final 19:33 of the game behind a pair of Marcus Mariota touchdown passes and two Royce Freeman touchdown runs to spark a run to that season’s CFP National Championship Game. MSU avenged the loss the next season holding off Oregon 31-28 on Sept. 12, 2015.