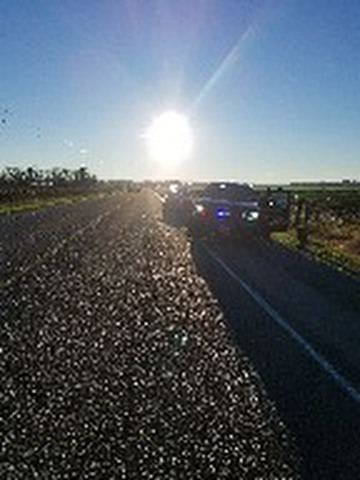 Yesterday, (12/04/2018) at 7:55 a.m., deputies were called to McKay Road NE near French Prairie Road NE after four vehicles collided resulting in multiple injuries and one fatality. In all two people were transported to the Salem Hospital with injuries, two people were treated on scene and sadly one person has died.

Investigators believe a small SUV, being operated by Mildred Schaber, age 81, of Newberg, was traveling east on McKay Road when for unknown reasons she began driving in the oncoming (west bound) lane. Ms. Schaber first side swiped a large work truck that was west bound on McKay. The work truck was being operated by Clifford Erickson, age 39, of Grand Ronde. Mr. Erickson avoided the head on collision by steering into the east bound lane. Mr. Erickson was treated on scene for minor injuries.

Ms. Schaber continued westbound and struck an oncoming passenger car head on. The driver of the vehicle Catherine Ashely, age 51 and her passenger Kacy McCauley, age 29, both of Aurora were transported to Salem Hospital. A fourth vehicle, a pickup truck, was being driven westbound by Keith Wright, age 84, of Aurora. Mr. Wright rear ended Ms. Schaber moments after the head on collision had occurred. Mr. Wright was treated on scene for minor injuries. Investigators believe the glare from the sun was a contributing factor in the crash.

Tragically, Ms. Schaber was killed in the collision, she was not wearing her seatbelt. According to the National Highway Traffic Safety Administration; seatbelt usage in cars saved an estimated 14,668 lives in 2016. The Sheriff’s Office is asking all of our residents and visitors to please buckle up and drive safely.