More than 180,000 Salmon-Eating Fish Removed from Columbia and Snake Rivers 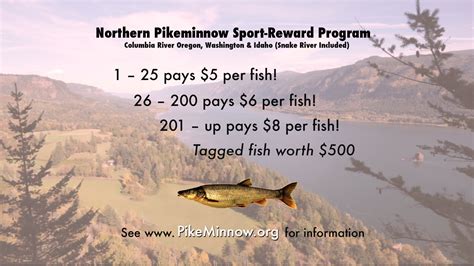 Portland, Ore. – It was a good year for those angling for northern pikeminnow in the Columbia and Snake rivers. More than 3,000 people registered for the 2018 Northern Pikeminnow Sport Reward Program. Combined, they spent more than 23,000 angler days catching and removing 180,271 of the salmon-eating fish, protecting young salmon and steelhead from predation.

While harvest was down a bit from 2017 due to higher river flows, angler success was better in 2018. Average catch per angler per day in 2018 was 7.52, up from 7.38 in 2017. All together, anglers were paid about $1.4 million for their efforts. The program, funded by the Bonneville Power Administration, has run annually from May 1 through Sept. 30 for more than 20 years.

Based on this year’s catches, BPA is successfully meeting its annual program goal to remove 10-20 percent of the predators. Northern pikeminnow anglers caught and removed about 11.5 percent of fish more than 9 inches long. The larger fish are the portion of the northern pikeminnow population believed to eat the most salmon and steelhead smolts.

“The goal of this program is to reduce the number of northern pikeminnow in the Columbia and Snake rivers,” said Eric McOmie, BPA program manager. “We’ve seen a substantial reduction in predation by these fish, which mean young salmon and steelhead have a better chance of making it to the ocean and eventually returning to the basin as adults.”

The reward program pays registered anglers $5 to $8 per fish, nine inches or longer. The more fish an angler catches during the season, the more their pikeminnow are worth. In 2018, state fish and wildlife biologists also released more than 1,000 specially tagged northern pikeminnow, each worth $500.

This year the top 20 fishermen who participated in the program earned an average of nearly $29,000 each. The top angler earned more than $71,000, reeling in more than 8,600 fish over the five-month season.

Northern pikeminnow are voracious eaters, consuming millions of young salmon and steelhead every year. Since 1990, anglers paid through the program have removed nearly 5 million pikeminnow from the Columbia and Snake rivers. Biologists estimate that the program has reduced predation on young salmon and steelhead by up to 40 percent from pre-program levels.

The BPA-funded program is administered by the Pacific States Marine Fisheries Commission. The 2018 season is scheduled for May 1 through Sept. 30, 2018. For more information about the program, call 800-858-9015 or visit www.pikeminnow.org.

About BPA
The Bonneville Power Administration, headquartered in Portland, Oregon, is a nonprofit federal power marketer that sells wholesale electricity from 31 federal dams and one nuclear plant to 143 electric utilities, serving millions of consumers and businesses in Washington, Oregon, Idaho, western Montana and parts of California, Nevada, Utah and Wyoming. BPA delivers power via more than 15,000 circuit miles of lines and 260 substations to 511 transmission customers. In all, BPA markets about a third of the electricity consumed in the Northwest and operates three-quarters of the region’s high-voltage transmission grid. BPA also funds one of the largest fish and wildlife programs in the world, and, with its partners, pursues cost-effective energy savings and operational solutions that help maintain affordable, reliable and carbon-free electric power for the Northwest. www.bpa.gov