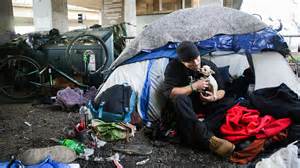 The action comes as city officials prepare to clear out campers at the bridge by tomorrow. Officials posted a warning earlier this week that they would be clearing out the homeless encampment under the bridge, where an estimated 15 to 30 people sleep at night.

Powers told the Statesman Journal the clean up will be done in coordination with social service agencies to provide access to services and shelter, so people have appropriate alternatives to camping under the bridge.