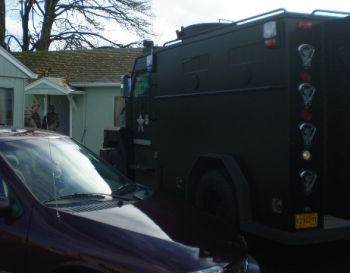 While attempting to break into a residence, Ketchem was confronted by a homeowner. As officers arrived, he ran into a house on Summer St NE through the back door. The female homeowner of the Summer ST residence fled out the front door, leaving Ketchem alone inside.

Officers surrounded the location and began to make announcements over a loudspeaker for Ketchem to surrender. After multiple attempts to contact Ketchem, the Salem Police SWAT Team was deployed. SWAT officers took up containment positions and closed multiple streets to ensure the public’s safety.

During the standoff, he started a fire in the residence and the Salem Fire Department was called to the scene; however, the flames self-extinguished.