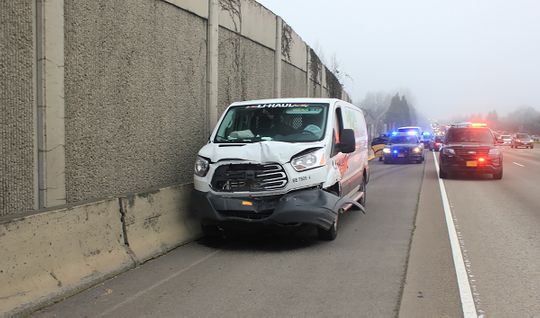 A northbound lane on I-5 was closed for about two hours Sunday evening after a man driving a stolen U-Haul van allegedly hit multiple vehicles, including a patrol car, while evading police.

Officers received a complaint at 4 p.m. about a man driving in a “reckless manner” in a U-Haul van in the Albany area, according to Lt. Steve Mitchell with Oregon State Police.

Officials say the van was stolen in the Seattle area earlier that day while being used to deliver Amazon packages.

Oregon State Police is continuing the investigation into an incident Sunday afternoon in the Salem area that resulted in the arrest of a man for multiple crimes. At about 4:20 pm, OSP troopers from the Salem area located the U-Haul and observed it to still be driving in a reckless manner northbound on Interstate 5. OSP troopers monitored the U-Haul as it continued northbound and exited at Market Street.
Police found the van but stopped following the vehicle after the driver, identified by officials as Jose Flores, 38, of Medford, refused to pull over. The driver continued north toward Salem.

The driver exited I-5 at Market Street where OSP, Salem Police and Marion County Sheriff’s officers tried to box him in at a Fred Meyer gas station.

The U-Haul driver hit one OSP patrol car and fled. He crashed into a passenger car and a semi-truck on Market Street before getting back on I-5, Mitchell said.

Police chased him down I-5, until his van stopped working just before milepost 258.

Flores was arrested on the charges of reckless driving and failure to yield to an emergency vehicle, Mitchell said.

There were no injuries. The passenger car had to be towed.