Samuel Taylor Sentenced for Manslaughter in the First Degree 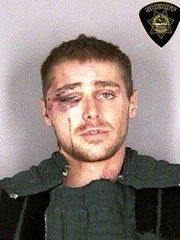 On October 23, 2017, the Marion County Sheriff’s Office responded to Jere Moody’s home off of Highway 22 in Stayton on a report that the defendant was stabbing Moody multiple times. Deputies arrived on scene and located defendant standing over the victim with a knife in his hands. The defendant appeared to be in a catatonic state and immediately resisted multiple deputies during his arrest. Four deputies were required to get the defendant into custody after a lengthy struggle that required repeateddeployments of a Taser, multiple focused blows to the head and face, and the physical force of K9 Officer Rolo. Based on defendant’s demeanor, greater than average strength in resisting, and other physical abnormalities, deputies believed the defendant may have been experiencing an episode of excited delirium during their contact with him, potentially limiting his ability to form intent during the attack of Jere Moody. During a subsequent interview, the defendant admitted to using marijuana and “crack,” which was later confirmed in a subsequent analysis of his blood. The medical examiner determined that the cause of death was a stab wound to the neck.