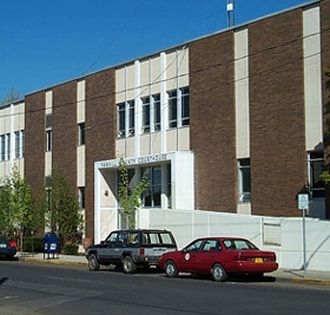 As officers responded, a single unoccupied vehicle was found crashed on Hwy 219 and East 2nd Street. A witness reported that a male had crashed the vehicle and fled on foot. Moments later officers received another call that an unknown male barged into an apartment located at 2501 E Second St. and told the resident that someone was shooting at him.

The suspect then entered a second apartment in the complex, causing that resident to lock themselves in a room and call police. The unknown male, later identified as German Alberto Florian-Garcia, of Salem, then locked himself in the downstairs bathroom and refused to come out when police arrived. Residents from the involved and neighboring apartments were evacuated for safety after Florian-Garcia barricaded himself inside.

Officers negotiated with the suspect for over an hour and deployed 40 mm OC (pepper spray) rounds to eventually extract Florian-Garcia. The suspect surrendered and was taken into custody without any injuries from the arrest. Mr. Florian-Garcia was transported to Providence Newberg Medical Center for treatment of OC exposure and the injuries he sustained from the earlier vehicle crash. After being medically cleared he was lodged at the Yamhill County Correctional Facility. Any prior information about persons chasing or shooting at Florian-Garcia is thus far unfounded.

German Alberto Florian-Garcia, 48 of Salem, was arrested on the following charges:
DUII
Criminal Trespass in the 1st Degree
Interfering with a Police Officer
Disorderly Conduct
There are no photos of the suspect available.