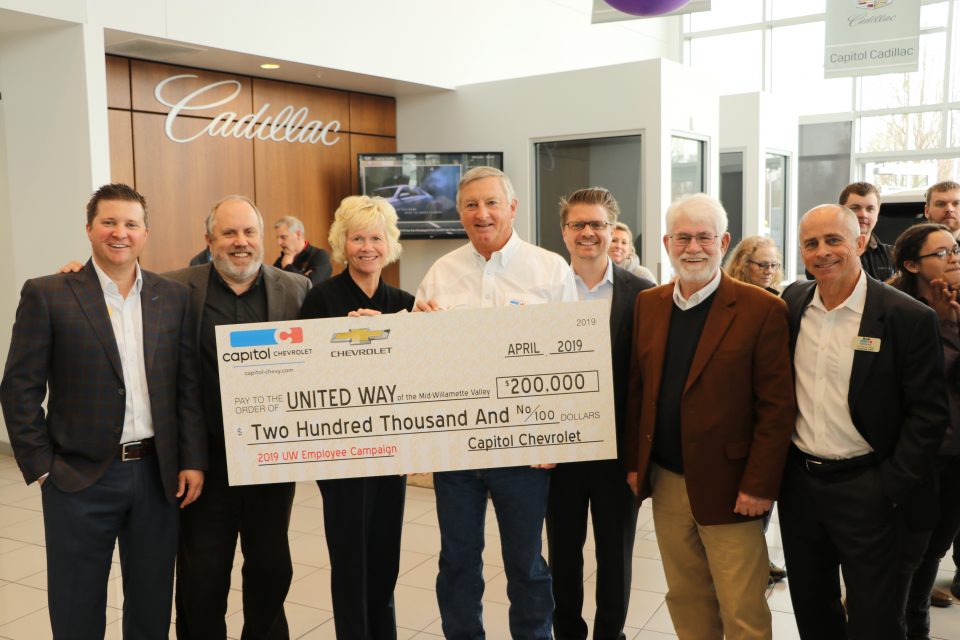 During their annual 28 Days of Love fundraiser, Capitol Auto Group (CAG) raised a company record $200,000 in donations for the United Way of the Mid-Willamette Valley. Over $180,000 of the donations came from employee pledges and payroll deductions.

“Over 90 percent of our employees contributed to this amazing cause,” said Carrie Casebeer, Marketing Director. “We even had 28 percent give $1,000 or more. I am so proud of our outstanding staff that care about their community.”

The annual 28 Days of Love campaign is comprised of various fundraising events. This year, the events included a bake sale, silent auction and Friday luncheons.

“When Carrie told me the astounding amount that Capitol employees had raised, I was left speechless,” said Hays. “I didn’t know what to say to that that could ever show our appreciation of that kind of generosity. Their employees are everyday heroes. People who give without any expectation of reciprocation or notoriety.”

“This does not happen in Salem every day,” said Salem Mayor Chuck Bennett. “There is a community… that supports groups like the United Way in a way that the city cannot. It makes it possible to meet the needs of the broader community.”

“Employees don’t do this because they expect to get anything in return,” said Scott Casebeer. “They do it because they care.”

To learn more about how to conduct your own giving campaign visit the United Way at www.unitedwaymv.org.

About United Way of the Mid-Willamette Valley: Founded in 1937, the United Way of the Mid-Willamette Valley works to unite people and resources to build resilient communities that thrive. We are an independent 501(c)(3) nonprofit organization governed by a local volunteer board of directors, and work with more than 60 social service providers to support the more than 507,000 residents in Marion, Polk and Yamhill Counties in the Mid-Willamette Valley, Oregon. Dedicated to facilitating lasting social change, we work together with businesses, government, schools, faith groups, individual community members and nonprofits – because it takes the whole community to get the kind of results we need. https://www.unitedwaymwv.org/