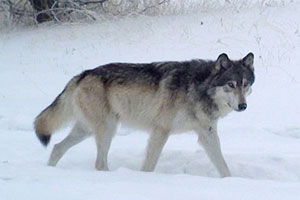 SALEM, Ore.—State wildlife biologists counted 137 wolves in Oregon this past winter, a 10 percent increase over last year’s count of 124, according to the Oregon Wolf Conservation and Management 2018 Annual Report released today at odfw.com/wolves.

This annual count is based on verified wolf evidence (like visual observations, tracks, and remote camera photographs) and is considered the minimum known wolf count, not an estimate of how many wolves are in Oregon. The actual number of wolves in Oregon is likely higher, as not all individuals or groups of wolves present in the state are located during the winter count.

Sixteen packs were documented during the count, up from 12 packs in 2017. (A pack is defined as four or more wolves traveling together in winter.) Eight other groups of 2-3 wolves were also identified. Fifteen of those packs successfully reproduced and had at least two adults and two pups that survived through the end of 2018, making them “breeding pairs,” a 36 percent increase over last year’s number.

“The state’s wolf population continues to grow and expand its range, now into the central Oregon Cascade Mountains too,” said Roblyn Brown, ODFW Wolf Coordinator.
Highlights from the report:

Two wolves were found killed unlawfully in 2018 (down from four in 2017). A juvenile wolf believed to be from the Grouse Flats Pack (a pack that uses Oregon but is counted as a Washington state pack because it dens there) was shot. The radio-collared breeding female of the Mt Emily Pack was shot on the Confederated Tribes of the Umatilla Indian Reservation. Oregon State Police and CTUIR law enforcement continue to investigate these incidents and are actively seeking more information. Rewards ranging from $2,500 to $15,000 have been offered for information leading to a conviction in these and previous cases.

Confirmed depredation incidents by wolves increased 65 percent from last year, with 28 confirmed incidents (up from 17 last year). A total of 17 calves, one llama and two livestock guardian dogs were lost to wolves and an additional 13 calves were injured. Three wolf packs were responsible for the majority of depredations (Rogue – 11, Pine Creek – 6 and Chesnimnus – 5). While known wolf numbers have increased considerably over the last nine years, depredations and livestock losses have not increased at the same rate.

“As the wolf population has expanded into new areas in Oregon, livestock producers have adjusted the way they do business to remove bone piles and incorporate non-lethal measures that can reduce the vulnerability of their livestock to depredation by wolves and other predators,” said Roblyn Brown, ODFW Wolf Coordinator. “We extend our thanks and appreciation for their efforts.”
The Oregon Department of Agriculture’s Wolf Depredation Compensation and Financial Assistance Grant Program also awarded $160,890 in grant funds to compensate livestock producers for losses and to fund preventive non-lethal measures.

ODFW staff will present an overview of the draft Oregon Wolf Conservation and Management 2018 Annual Report to the Fish and Wildlife Commission at their April 19 meeting in St Helens. The presentation will be during the Director’s Report, and no public testimony is taken during this portion of the meeting.