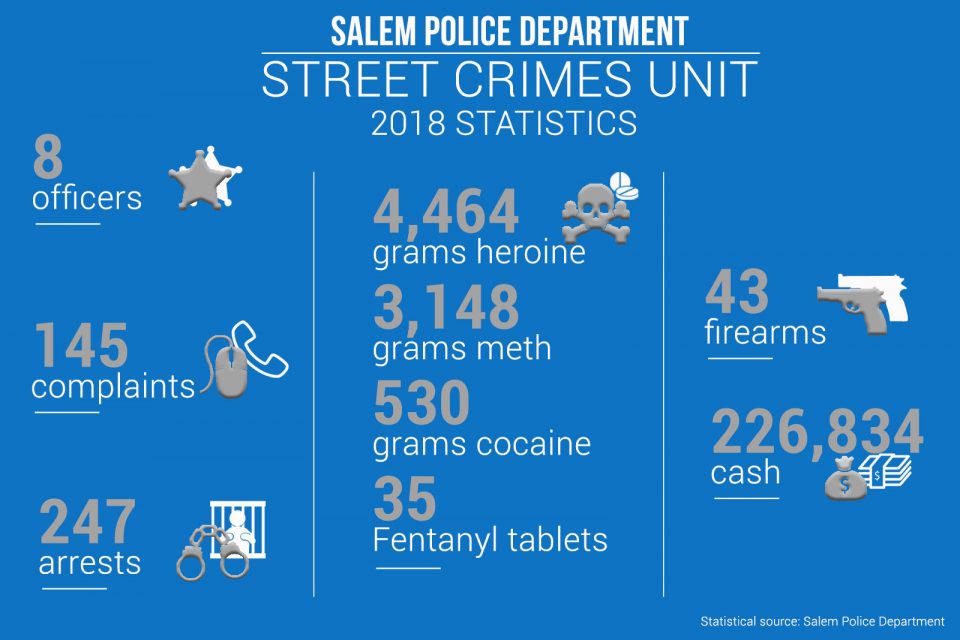 Salem, Ore. — 2018 was a remarkable year for the Salem Police Department’s special investigations team, known as the Street Crimes Unit. With the primary duty of identifying and resolving community livability issues, including controlled substance investigations, the team of one sergeant and seven officers made great strides in decreasing drug activity through arrests and the removal of drugs from the community.

“These drug-related issues negatively impact the community and create a sense of fear and victimization within our area,” said Lieutenant Debbie Aguilar of the Investigations Division who supervises the unit. “With our recent successes, the United States Attorney’s Office District of Oregon has taken notice and is working to aggressively pursue federal prosecution for our cases involving dangerous career criminals.”

Explained Aguilar, “Many of these investigations were long term, taking weeks, sometimes months of intense investigation to build a prosecutable case.” The Street Crimes Unit worked on more than 300 activities which resulted in the arrest of 247 individuals on crimes ranging from Delivery of a Controlled Substance to Attempted Murder. Eight of those investigations resulted in a federal indictment by the US Attorney’s Office.” These are cases where the possible sentences can range up to life in prison which can be longer than the penalties through the state court system,” said Aguilar.

Investigations are routinely initiated with information provided by concerned citizens. The department has several methods for community members to submit tips about suspected drug activity. “Whether the tips are provided through the hotline or online, in 2018 our detectives investigated 145 drug activity complaints,” added Aguilar.

The Street Crimes Unit is also tasked with high-risk, or high-profile, fugitive apprehension. During 2018 they worked 61 different fugitive apprehension cases, some of which involved working with outside agencies, such as the United States Marshals Service, Oregon State Police, and other neighboring agencies.

“We recognize the impact these crimes have on our community. Growing our partnership with the US Attorney’s Office, in addition to our existing relationship with the local district attorneys aligns with the City of Salem’s vision of a safe and livable community.” Aguilar concluded.

For more information about reporting suspected drug activity, visit the Salem Police page on the City of Salem website.