Home  /  KYKN News  /  Added Greenspace on Downtown Streets — What Do You Think?

Added Greenspace on Downtown Streets — What Do You Think? 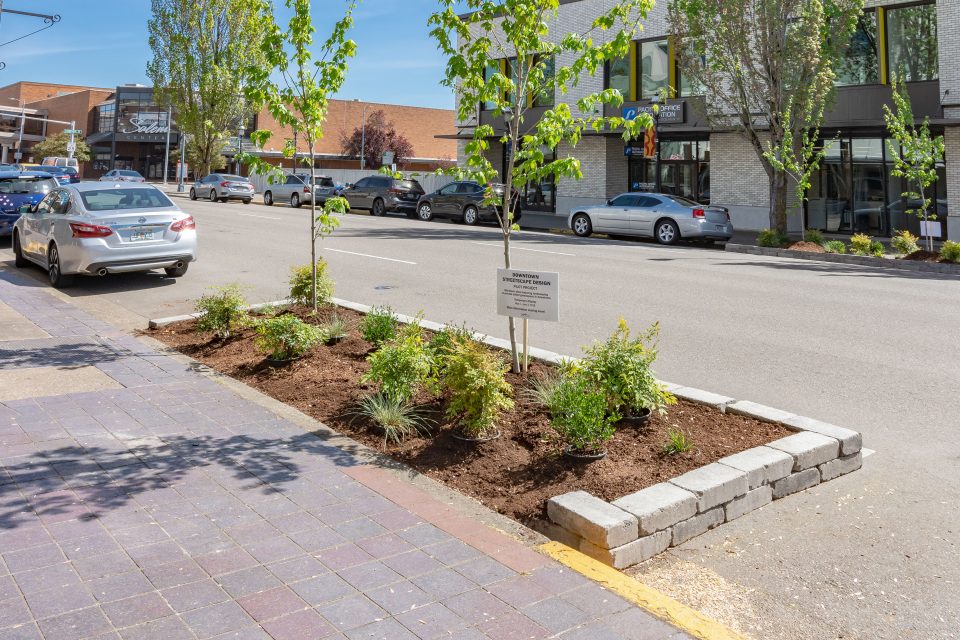 Salem, Ore. – Have you noticed the Downtown Streetscape Pilot Project on Commercial or Liberty Streets? Temporary mid-block landscaping has been installed in the 300 block of Commercial, and on the 200 block of Liberty as part of a pilot project generated from the Downtown Streetscape Plan. The temporary displays will be featured at the four mid-block locations from May 4 – Jun. 3.

An online survey regarding the pilot project is available for community feedback. Survey results will be considered when making decisions about permanent projects.
The concept of mid-block landscaping in parking spaces was based on a careful review of existing conditions, feedback from community meetings, discussions with stakeholders, and other community input. The mid-block landscaping concept is being introduced as a response to the community’s request to have more greenery in Downtown, creating feelings of calmer, narrower streets.

Permanent mid-block landscaping throughout Downtown will mean that a small number of parking spaces would be eliminated in exchange for more greenery. Because there is community and business interest in both parking spaces and more greenery, the mid-block landscaping was not included in the adopted Plan, but may be added in the future depending on feedback from the pilot project.

The Downtown Streetscape Plan (Plan) provides a guide to transform the downtown public areas into a cohesive, attractive, and inviting environment that benefits all downtown users. The Plan examines the sidewalks, between the curb and the face of the buildings. The Plan was unanimously approved by the Urban Renewal Agency on Apr. 22, 2019.

Implementation of the Plan will be phased over time based on available funding each year and to minimize business disruption. When possible, implementation will be coordinated with new development proposals in Downtown. The Mid-Block Downtown Streetscape Project is the first pilot project related to the Plan.

Additional information about the Plan and pilot projects can be found online.