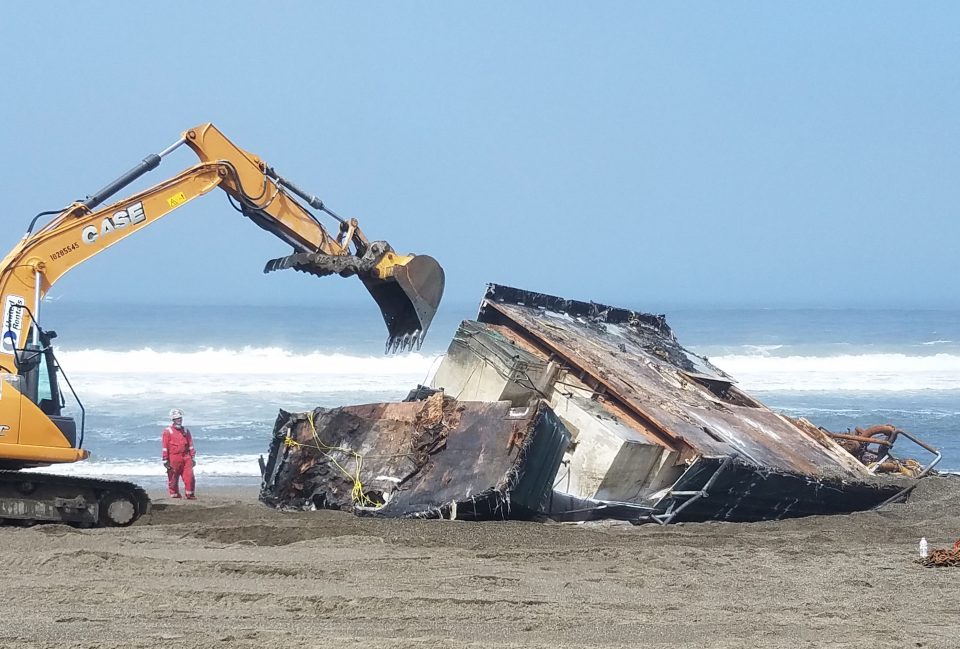 Bandon, Ore. Friday, May 17, 2019 – Crews finished cleanup of major debris left by the wreck of the Ann Kathleen, a 64-foot fishing vessel. The boat came ashore Thursday, May 2 on a beach south of Bandon, Oregon after catching fire. No one was injured. The vast majority of the wreckage was removed by helicopter over the last week. A portion of the heavy keel was left to sink into the sand.

The cleanup was organized by the Oregon Parks and Recreation Department and funded by the boat’s insurer. It involved excavators, helicopters, a salvage crew from Global Dive and Salvage, Inc. out of Seattle, with monitoring and support from the Coquille Indian Tribe, U.S. Fish and Wildlife Service, and U.S. Bureau of Land Management. The wreck site is several miles from a developed beach access and home to sensitive resources like the western snowy plover, a threatened shorebird in the middle of its nesting season.

The initial cleanup response, led by a unified command that included the Oregon Department of Environmental Quality and the U.S. Coast Guard, began May 3 and recovered more than 1,000 gallons of diesel fuel. Some residual fuel was recovered during final demolition. No hazardous fluids from the shipwreck were detected on the beach or in the ocean.

Bait fish were removed from the wreck and temporarily buried in containers at the site for later removal from the beach; burying and removing the bait is necessary to avoid attracting predators to the nesting area. After excavating sand from around the boat, a helicopter carried a dozen loads of heavy debris to the Cape Blanco Airport eight miles south. Smaller, lighter debris was removed using ATVs. The keel was deemed too heavy to fly out. The crews excavated around it and allowed it to sink naturally into the sand, where it now rests several feet beneath the surface. The keel does not contain hazardous material. Staff monitoring the cleanup reported plovers were not disturbed by the work.

More information on sharing the beach with plovers is online at http://bit.ly/wsplover.