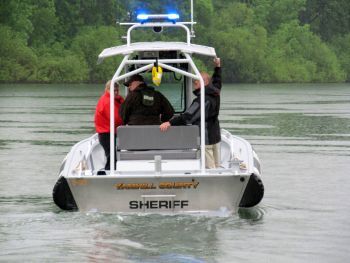 On Saturday, June 15 2019, at approximately 10:52 pm the Polk County Marine Patrol was called out on a report of someone yelling for help on the Willamette River just west of River Mile 85, upstream from Salem. Rescued on an island in the river between Minto Brown and Salem-Dallas HW milepost 23 was 50 year old Mr. Brandon D. Weber.

Good Samaritan’s Mr. Casey Campbell and Ms. Christina Kazlas called 911 after hearing someone yelling for help. Currently looking for work in the Salem area, Mr. Campbell and Ms. Kazlas have been living in a camp along the river for about a month. The voice was initially easy to hear but faded as time went on. By the time Polk County Deputies Chris Knudson and Mark Robertson arrived at the camp, the calls for assistance could barely be heard above traffic traveling along HW 22.

Not usually on the water at night, the marine unit was called on to assist. Reserve Deputy Thomas Dalke launched from the Salem Yacht and Boat Club accompanied by Deputy Knudson. While checking the area they located a deflated float tube on the island. Searching on foot, they located Mr. Weber laying in the grass at approximately 2:00 am. Mr. Weber was unable to walk due to an injury and was carried a short distance to the boat after which it returned to the launch. A medic unit was staged nearby where Mr. Weber was evaluated and subsequently transported to Salem Hospital for treatment.

When asked, Mr Weber reported being transient and living in the area along the river. After an argument around 4:00 pm he decided to float the river for a distance when his tube lost air and he had to swim to the Island. An injury to his leg exacerbated by his situation left him unable to swim further to get back to the north shore of the river. With the temperature in the 50’s when found, Mr. Weber complained of cold but had not yet become hypothermic according to EMS personnel on scene.

The Polk County Marine Patrol is a seasonal program that recently started up operations for the 2019 summer months, made possible with funding from the Oregon State Marine Board. It is staffed by reserve deputies who are part of the Polk County Sheriff’s Reserve unit.

The Polk County Sheriff’s Office would like to express our appreciation to Mr. Campbell and Ms. Kazlas for their willingness to help someone in need and reach out to authorities. Without their assistance, the outcome of Mr. Weber’s ordeal could have been tragic.