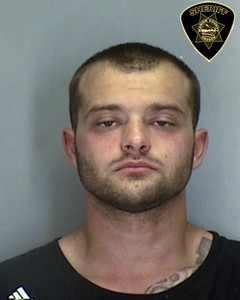 At approximately 0945 on the morning of 08/11/2019 Marion County Sheriff’s Office received a call from the 4000 block of Sky Lane SE of a burglary in progress.
Upon arriving on scene Deputy’s obtained information the suspect had assaulted the victim with a flashlight and fled the scene in the victim’s motor home. The motor home was later located behind some brush on to the 8000 block of Smith Rd. SE.

The suspect was taken into custody at approximately 1110 this morning and will be transported to the Marion County Jail after being cleared by medics on scene.

The suspect has been identified as Bryce Mason-McCauley,29, of Salem Oregon. He has been booked into the Marion County Jail on Parole Violation with additional charges on the way.