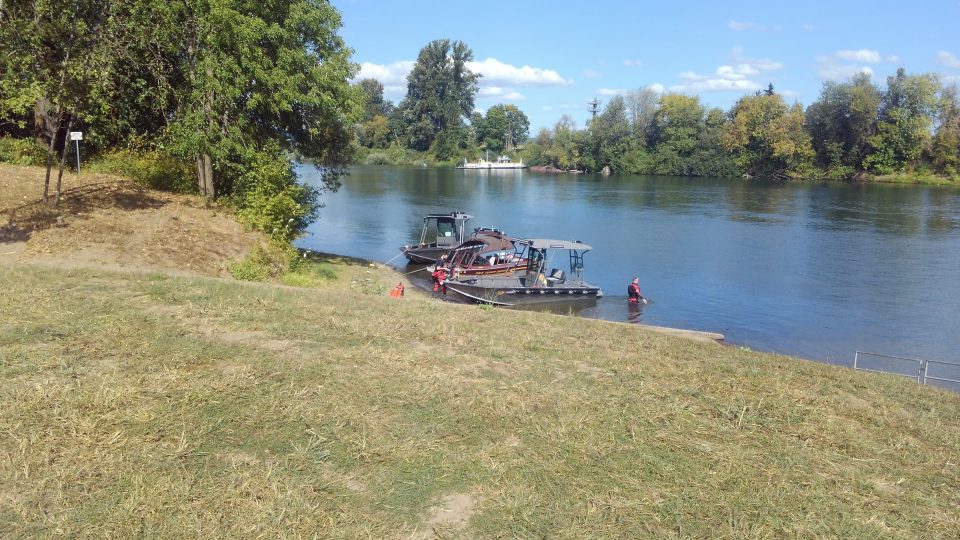 Utilizing two patrol boats operated by Polk County and one from Benton County, divers from the Clackamas County Sheriff’s Office Water Rescue Team will be deploying in the area where Ms. Allen was last seen. It is suspected that even though Ms. Allen was outfitted with a life vest at the time she went into the water, the heavy current flowing into and around a large debris field made up of trees and roots was substantial enough to hold her under water, particularly if snagged.

Though the area to search has been deemed potentially very hazardous, Clackamas County is currently on scene and about to commence recovery operations. Polk County Fire District No. 1 has provided a unit with medically trained personnel to be on scene during operations.

At 4:59 PM Clackamas County Sheriff’s Office Water Rescue Team pulled their divers from the water and ended their search for Ms. Allen due to hazardous conditions. Team Leader Sgt. Marc Griffith advised that it was simply too high risk to justify further searching. The current at the location was estimated to be about 8 knots which translates to just over 13 feet per second, fast enough to stress the tethers they were using and adversely affect other equipment. Maybe even more concerning was the debris from trees and roots littering the area. It was described as looking similar to “a handful of matches that were dropped.” The debris was impossible to safely negotiate without putting divers in jeopardy.

Sheriff Mark Garton was briefed on the situation and based upon the many years of search and rescue experience on scene and a lack of other options, the Sheriff suspended all search and recovery operations until further notice. Family was notified and while understandably saddened by the news, understood the reasoning behind his decision. They expressed their gratitude for the work that had been done by all involved. The family has requested that their privacy be respected and that the media not attempt contact.

Efforts to determine any other possible options will be made over the coming days and should something possible to carry out be identified, the Polk County Sheriff’s Office will reevaluate the suspension of recovery operations.

The Polk County Sheriff’s Office would like to publicly thank each and every agency that assisted with this incident and acknowledge just how important that help was in order to effect a proper search.

On Saturday 08-31-19 at approximately 2:35 PM a water rescue call came in to the Willamette Valley Communications Center concerning a party of friends that were floating the Willamette River near river mile 105, just downstream from Buena Vista Park in Polk County, south of Independence.

Information was that float tubes tied together and occupied by three adult females overturned after running into a large root ball snag situated a short distance off the west shore of Wells Island. Two of the women were able to get to shallow water and scramble to shore on the island but the third woman was not seen again after going into the water. Two adult men with the party were able to unhook their tubes prior to reaching the snag and were able to avoid it. They made it to the Polk County shoreline without incident.

Albany Fire personnel were able to utilize personal watercraft to retrieve the two women from the island and advised that the strong current in the area actually overturned their watercraft. Fortunately no one was injured and the two women on shore were rescued and transported back to the park in Buena Vista.

Searchers continued with their efforts until nightfall, joined shortly before dark by a helicopter from REACH Air Medical Services that over flew the area. Search efforts were unsuccessful and still missing is 37 year old Tracy Allen of Vancouver, WA. Ms. Allen was visiting friends in the area and they decided to take a float on the river. Ms. Allen, who knew how to swim, was wearing a life jacket at the time of her disappearance but as previously indicated the current in the area was quite strong and treacherous debris from trees littered the area.