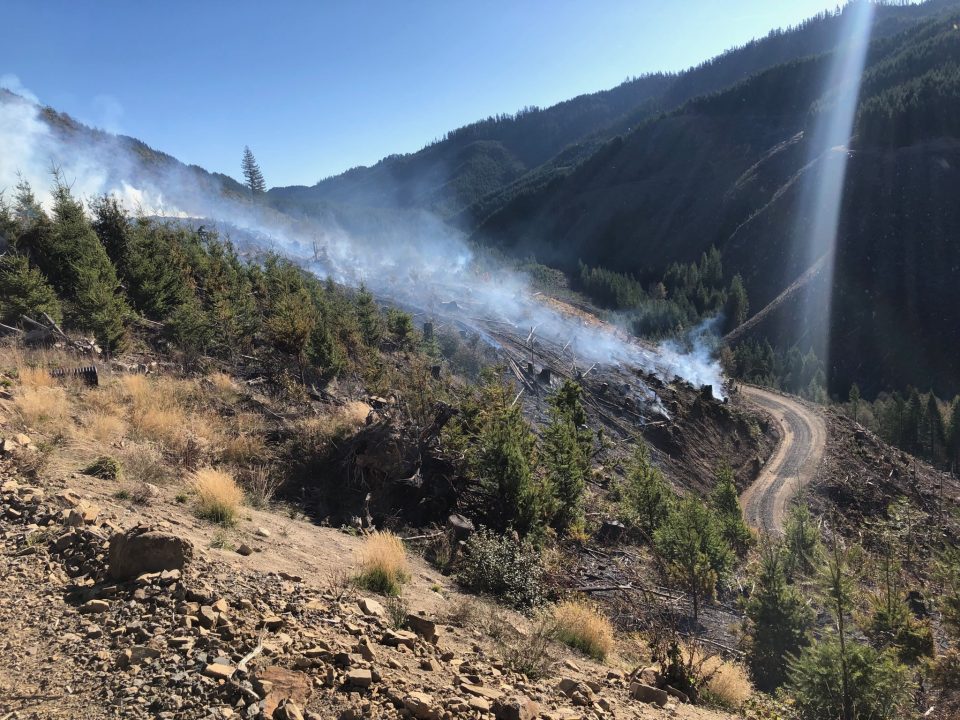 Two fires have grown in size due to continued east winds and difficult access:

Firefighters made significant progress on fires reported yesterday, with both in mop-up status:

There are no road closures or threatened structures associated with any reported fires at this time. Resources engaged on the fires include water tenders, engines, and hand crews.
In the last 24 hours, there have been 22 fires reported across the Willamette Valley on lands protected by ODF. While these fires officially remain under investigation, the suspected causes for the vast majority are prescribed burns rekindled by recent easterly winds and dry conditions.

“It is important to note the timing of these fires,” said ODF’s Northwest Oregon Area Director Andy White. “The majority of these burns were started weeks ago when conditions were optimal for burning. ODF encourages and supports landowners to take advantage of optimal conditions for fuels reduction work on their property. Precautions are taken, forecasts are considered, and every effort is made to ensure minimal impact and maximum benefit to the landscape. This is a valuable reminder of how quickly conditions can change and highlights the value of our partnerships with landowners and other agencies.”

ODF flew a contracted aircraft yesterday and today to check on known fires and detect potential new starts or smoke from rekindled slash piles. Given the steep terrain, remote access, and multiple ownerships across the valley, this aviation resource is a valuable tool in covering a lot of ground in a short time span.

ODF appreciates the help from the public in preventing new fires and encourages Oregonians to hold off on those back yard burn piles until conditions improve.

Smoke may be visible in some areas as resources remain engaged on these fires. The Department of Environmental Quality continues to monitor for smoke and has confirmed the air quality remains in the good to moderate range. Those wishing to monitor on their own may check DEQ’s Air Quality Index at https://bit.ly/2N372UF or download the free OregonAIR app.