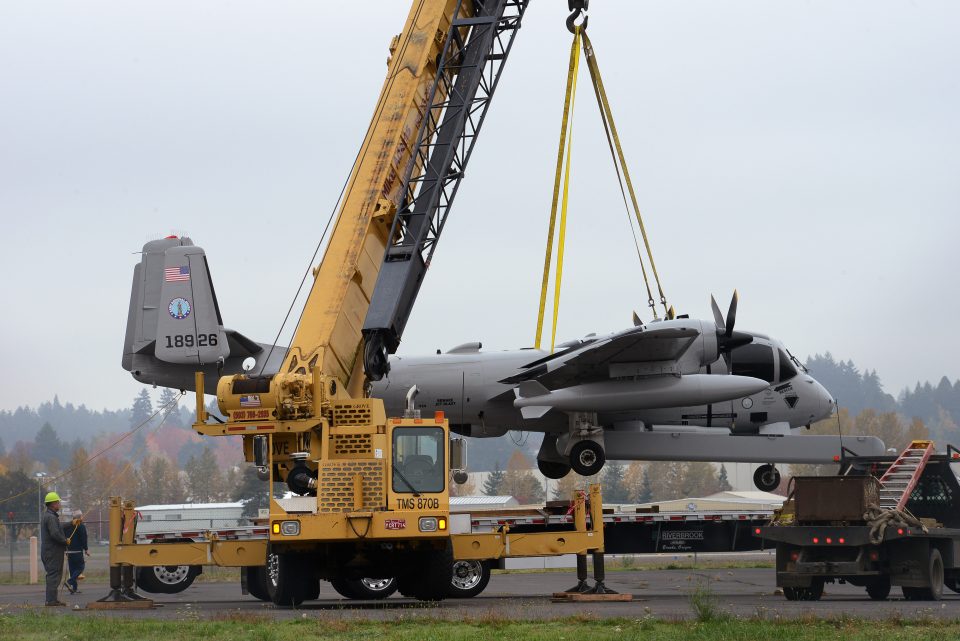 The Oregon National Guard will formally dedicate a resorted OV-1 Mohawk surveillance airplane as part of a legacy display near the entrance of the Army Aviation Support Facility (AASF) in Salem, Oregon on Nov. 2, 2019 at 11:00 am.

Mohawk #926 will be the centerpiece to a permanent display, along with several historical interpretative panels honoring the legacy of the OV-1’s service to the Oregon National Guard from 1972 to 1992. The OV-1 display will also pay tribute to the service of U.S. Army Lt. Col. Robert G. Nopp, and Staff Sgt. Marshall F. Kipina who were lost aboard an OV-1 aircraft during the Vietnam war, and to Oregon National Guard Sergeant 1st Class (Ret.) Kimberly D. (Robinson) Jark, the first female U.S. Army OV-1 Technical Observer (T.O).

The dedication of Mohawk #926 culminates a three year effort by retired Oregon National Guard Mohawk pilots, maintenance technicians and other volunteers who helped purchase, transport and restore the aircraft that was assigned from Sept. 1973 to July 1989, to the 1042nd Military Intelligence (M.I.) Company, later reorganized as the 641st M.I. Battalion. The aircraft supported a number of various missions that included border surveillance for the U.S. Border Patrol, photographic mapping for Federal and State agencies, and most notably for monitoring Mt. St. Helens before and after the May 18, 1980 eruption.

A Salem resident, Lt. Col. Nopp was piloting an OV-1 along with Staff Sgt. Kipina, a T.O., both assigned to the 131st Aviation Company, when they were lost during a surveillance mission on the night of July 13, 1966 in a heavily mountainous region of Laos, along the western border of Vietnam. Their remains were discovered and officially accounted for on Feb. 1, 2018 and both are now buried at Arlington National Cemetery, near Washington, D.C.

Other special individuals being recognized of note include: Maj. (Ret.) Stephen Hammons, who is being honored as official “Pilot in Command” of Mohawk #926; Nancy Dearborn, wife to 1st Sgt. (Ret.) Richard Dearborn, who is being honored as the official “T.O.” of Mohawk #926; Paul Pefley, Mohawk Technologies, LLC Lantana, Florida, that operated #926 commercially from 1996 to 2005, and provided considerable technical support, aircraft equipment and parts for the #926 Project; Mike Carter, Past Exalted Ruler, Salem Elks Lodge #336 that provided considerable support for the #926 Project, and former members of the 1042nd M.I. Company and 641st M.I. Battalion.

“This is an important ceremony to honor a unique part of the Oregon National Guard’s aviation history,” said Maj. Stephen Bomar, Public Affairs Director, Oregon Military Department. “For over 20 years, the OV-1 played a significant role for the Oregon National Guard, supporting a variety of missions, from firefighting and geographical aerial mapping, and most notably the Mt. St. Helens eruption.”

Music will be provided by the 234th Army Band, and a “No host” BBQ Luncheon at the Elks Lodge #336 will follow the event.

The Army Aviation Support Facility (AASF) in Salem is located at 1921 Turner Road S.E., Salem, Oregon, 97302. The event is open to the public and parking will be provided at the AASF.