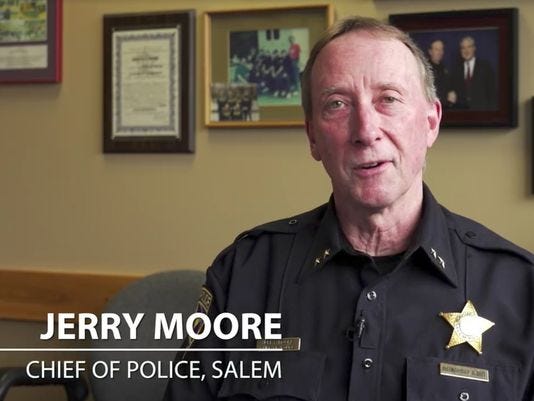 Chief of Police Jerry Moore of the Salem Police Department today announced his plans for retirement on November 30, 2019. Although a formal retirement date has been set, Moore will continue as police chief on an interim basis.

“I asked Chief Moore to continue as police chief. Chief Moore lives the values of the Salem Police Department and City. We are all better because of his leadership,” said City Manager Steve Powers. “We have several initiatives underway that require management continuity.”

“City Manager Powers has requested that I remain with the City as interim chief to address a variety of unfinished projects,” said Moore. The capital city police chief has been on the forefront of several current City projects, such as revenue for public safety and the move to the Salem Police Station.

“I am privileged to serve this community, my home. Although I will continue my service for a limited duration, know that I will do it with the same commitment I have always had,” said the veteran leader.

Officer Jerry Moore started with the Salem Police Department in 1979 after two-and-half years of service with the Dallas Police Department where he started his distinguished career. “Once I started with Salem, I knew I never wanted to leave,” Moore said about his chosen path in policing. A local boy, Moore grew up in the Highland neighborhood, graduated from McNary High School, and he received his criminal justice degree from the Oregon College of Education, now known as Western Oregon University. In July of this year, he entered his 43rd year of service as an Oregon law enforcement officer. Today November 14, he celebrates 14 years of service as police chief for the City of Salem.

For those wondering if any retirement celebrations are happening any time soon, the City’s plans are on hold while several projects are brought to completion. The public process of finding a new chief will occur after the first of the year, according to Powers. He added, “This early announcement gives us much-needed time to make the best decision for the future safety of our community.”