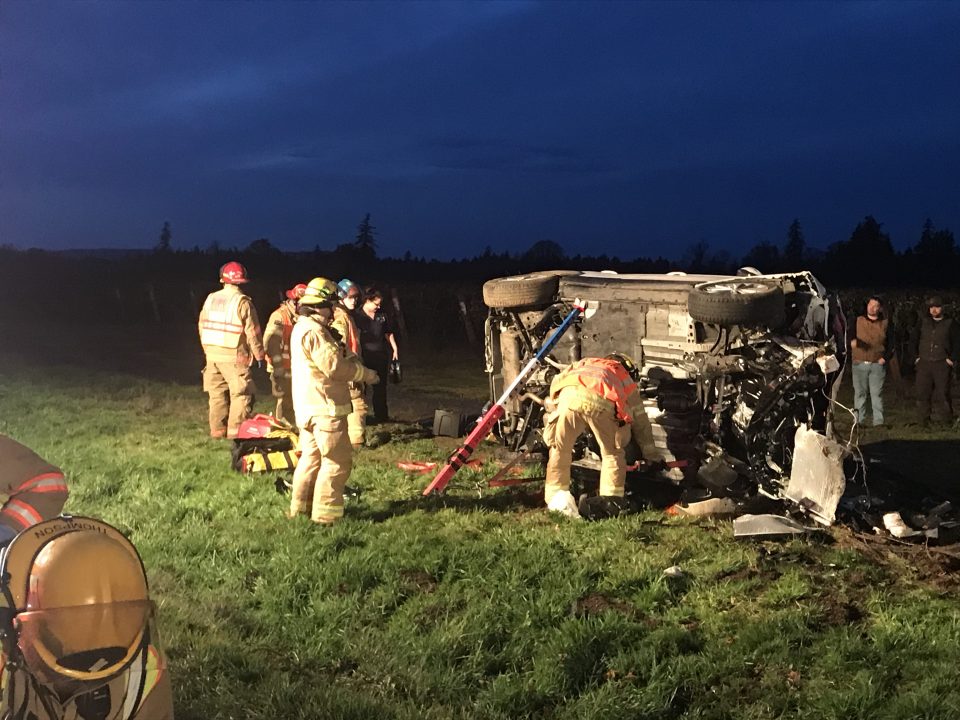 On Monday, January 20th, 2020, at approximately 8:18 am emergency crews were dispatched to a head-on crash involving a semi-tractor and trailer on Ehlen Road NE near Donald Road NE in northern Marion County. The semi-tractor and trailer carrying potato chips was overturned during the collision with a 2016 Jeep Cherokee. The driver of the Jeep was extricated from the vehicle by emergency crews and transported by ground ambulance with non-life threatening injuries. The driver of the semi-tractor was also taken to an area hospital with minor injuries.

During the investigation at the scene, investigators determined the semi-tractor and trailer were traveling eastbound on Ehlen Road NE prior to the collision. Witnesses reported the driver of the semi-tractor was not driving within their lane prior to colliding with an oncoming vehicle.

Andrew Addo, 37 year-old male from Tacoma, has been identified as the driver of the semi-tractor belonging to J.B. Hunt Transport. Addo was cited and released at the hospital for charges including Reckless Driving, Recklessly Endangering Another Person, and Assault in the Fourth Degree.

This crash is the second major collision this weekend in northern Marion County which resulted in lenghty road closures. On Sunday, January 19th, 2020, at just after 4:30 pm deputies were dispatched to the 8000 block of McKay Road NE to the report of a roll over crash involving a single vehicle, a 2019 Nissan. When emergency crews arrived, they found the lone occupant of the vehicle trapped inside and had to extricate her. The driver was transported by Life Flight to a Portland area hospital. While emergency crews were on scene of Sunday afternoon’s crash, two additional non-injury crashes occurred in the immediate area. The roadway was closed to traffic for approximately 1 ½ hours during the investigation of Sunday’s collision.

A 61 year-old Newberg woman, Dana Witt, has been identified as the involved driver in Sunday’s crash. Investigators believe alcohol use was a contributing factor to the single vehicle roll over; Witt was cited and released at the hospital for DUII. The driver sustained non-life threatening injuries as a result of the crash.

As of 3:30 pm on Monday afternoon, Ehlen Road NE at Donald Road NE remains closed to traffic while crews work to clear the roadway following this morning’s head-on collision. There is currently no estimated time frame for the roadway to reopen.