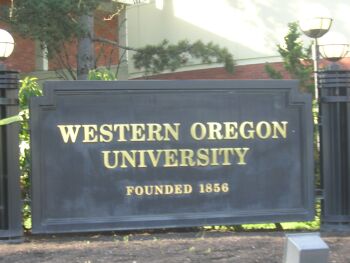 The Western Oregon University Board of Trustees discussed on Wednesday updates concerning a budget shortfall for the 2019-20 fiscal year and strategies for the 2020-21 university budget that address several universal higher education hurdles. President Rex Fuller reiterated his intention that the university remain affordable to Oregonians seeking a four-year degree.

“WOU is not immune to the challenges facing universities and colleges across the nation. Our enrollment is down at the same time state appropriations are not covering key, mandatory cost drivers,” Fuller said. “Despite those obstacles and our current budget shortfall, we will not be deterred from our goal to be the most affordable public university in Oregon.”

For the 2019-20 academic year, WOU had the lowest increase in tuition rates at 2.33%. It has not increased its housing rates for students in two years. Funding from the state came in at a lower level than anticipated. The FY20 shortfall is $1.3 million.

The university and its employees are collaborating to make budget reductions for FY20 that directly affect students as little as possible. Looking forward to fiscal year 2020-21, trustees on Wednesday discussed the university’s desire that neither tuition nor incidental fees should rise by no more than 5%. The board will finalize the FY21 budget at its June 10 meeting.

At the meeting, the board also:

For additional information via the board docket, visit wou.edu/board

Western Oregon University, founded in 1856 and located in Monmouth, is the state’s oldest public university. Serving approximately 5,000 students, WOU is a mid-sized, NCAA Division II institution with about 70 percent of the student population being from Oregon. A significant portion of attendees are members of under-represented groups, veterans or non-traditional students. WOU is Oregon’s campus of choice for those seeking a transformative education in a supportive, student-centered learning community where classes are taught by faculty. Together we succeed.