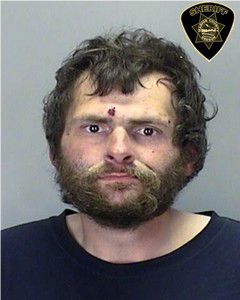 On Sunday, February 23, 2020, Salem Police officers arrested a suspect in connection with several fraud cases involving the passing of counterfeit US currency.  The suspect, Camden Ducharme, a 36 year old Salem resident, was charged with forgery in the first degree and theft in the third degree from the incidents and lodged at the Marion County Correctional Facility.

During mid-February, the Salem Police Department responded to two different calls from local girl scout troops, who reported receiving counterfeit US currency during a cookie sale.  The suspect used a counterfeit $20 bill to buy one box of cookies and received legitimate currency in change.  The victims recognized the bill as a counterfeit and contacted the police.

We want to thank the victim for making the report and providing such a good description of Ducharme. We also want to thank Walmart for helping us identify him in such a timely manner.