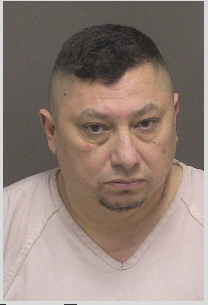 Keizer Police officers responded to a home in the 5400 block of Lakeport Street North on a reported domestic disturbance Monday night around 10pm. The victim reported that her husband, Silverton Police Sergeant Rene Bravo, 60 years old, was threatening her with a knife. The victim also reported that she was struggling with Mr. Bravo, who was attempting to gain control of a loaded rifle. Upon arriving at the call, responding officers quickly entered the home and located the victim and her two children in the residence and evacuated them. Officers found Mr. Bravo in the house wearing a ballistic carrier vest and refusing to comply with officers’ commands, eventually barricading himself in the home.

Because Mr. Bravo reportedly had access to weapons and was not compliant with the officers, neighboring homes were evacuated. Personnel from Keizer Police, Oregon State Police, Salem Police, and the Marion County Sheriff’s Office secured the house and surrounding area to ensure public safety. Salem Police SWAT was called to respond. Mr. Bravo refused to surrender to negotiators and other personnel but was eventually subdued by a SWAT K9 and taken into custody. Mr. Bravo was treated by medics at the scene for minor injuries and was transported to Salem Health before being transported to the Linn County jail, where he was lodged.