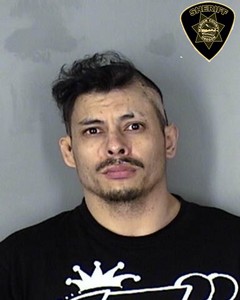 On April 6th, 2020, at shortly before 6:00 pm, deputies from the Marion County Sheriff’s Office were called to the Cedar Court Apartments in the 3400 block of Silvercedar Place NE in unincorporated Salem. The victim reported they were walking toward their apartment when a neighbor ran down the stairs toward them while holding a knife. The victim was able to get inside, uninjured, and called for deputies to respond.

When deputies arrived on scene they attempted contact with the suspect who had gone back to his apartment and barricaded inside. After initial efforts to get the man to surrender were unsuccessful, SWAT was called to the scene along with trained negotiators. At just after 9:20 pm, the suspect exited the apartment and was safely taken into custody.

Eduardo Espinoza Lopez, 34, of Salem has been lodged at the Marion County Jail for charges including Attempted Assault 2, Unlawful Use of a Weapon, and Menacing.

Espinoza Lopez is scheduled for arraignment at 1:30 pm on April 7th, 2020, at the Marion County Circuit Court Annex.