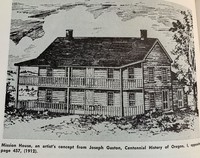 Salem, Ore. — Archaeologists working with the City of Salem and other partners will begin excavating the site of the second Jason Lee mission this Friday, April 17, 2020.
The site at 990 Broadway Street NE in Salem is the future home of a mixed-use building.

Largely unappreciated during his lifetime, Lee is credited with bringing Oregon under United States control. The mission was built between 1840 and 1841. It was moved in 1963 to the Willamette Heritage Center.

At first glance, the site doesn’t reveal much. It’s a modest parking lot alongside a grassy area. But historic records revealed that the location was not only Lee’s mission, but the building also served as Salem’s first post office, the territorial treasury, a courtroom and later as a boarding house. The site also represents a significant point of contact between local indigenous people and incoming settlers.

The excavation is taking place through a public-private partnership including:

The project was originally planned to include local unskilled volunteers and students, as City projects have in the past. However, the pandemic has forced the city to scale back the project. Participants have been limited to archaeologists and their families, archaeology students from Willamette University, and trained members of the Oregon Archaeological Society.

“We will be practicing social distancing on the site throughout the project and encourage family members to volunteer together,” said Kimberli Fitzgerald, Historic Preservation Officer. Units will include a lead excavator, screener, artifact sorter, and a recorder, all working at acceptable social distance from one another. Only two units will operate at any one time.

Excavation is set to conclude Monday, May 4.

The project has already begun with non-invasive ground-penetrating radar surveys based on historic Sanborn maps, as well as soil and core sampling. Selective excavation and artifact collection start Friday.

In lieu of public participation, the project will include some virtual opportunities to follow along. Planned are daily Instagram photos, weekly videos and a virtual Open House Saturday, May 2, starting at 11 a.m. through Facebook Live.