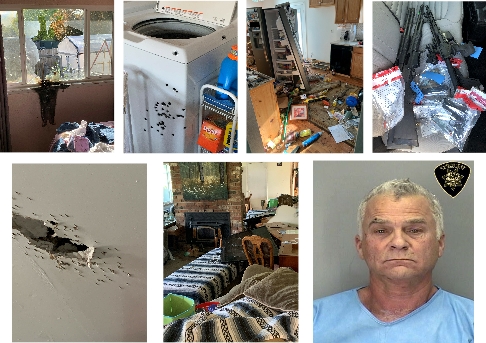 On April 22, 2020, at around 1:23 PM, Keizer police officers responded to a report of a domestic disturbance at a home in the 4700 block of Verda Lane NE. The caller reported her husband, Robert Beck, was intoxicated, throwing items, and punching walls in their house. The caller further stated Mr. Beck was armed with a handgun. Responding officers were able to evacuate Mr. Beck’s wife when they arrived, but determined no crime had occurred and left the scene without contacting Mr. Beck.

At around 10:42 PM on the same evening, officers received a call from Mr. Beck, who reported he had unsuccessfully attempted to set fire to his house. Officers and detectives subsequently investigating the scene determined Mr. Beck, who was alone in his house at the time, had indeed poured several gallons of gasoline in his house and had attempted to set it on fire. Additionally, investigators determined Mr. Beck had fired multiple rounds from various firearms and learned some of the bullets traveled through walls; however, no person or property outside the house appeared to have been struck. Electricity to the house was turned off, and a code enforcement officer responded to ensure the gasoline was not in danger of igniting. Detectives also discovered a suspected explosive device in the house and contacted members of the Salem police bomb squad who responded to render the device safe. Mr. Beck was ultimately arrested and lodged at the Marion County jail for the listed charges.

Charges: Unlawful use of a weapon and reckless endangering. Total bail $15,000