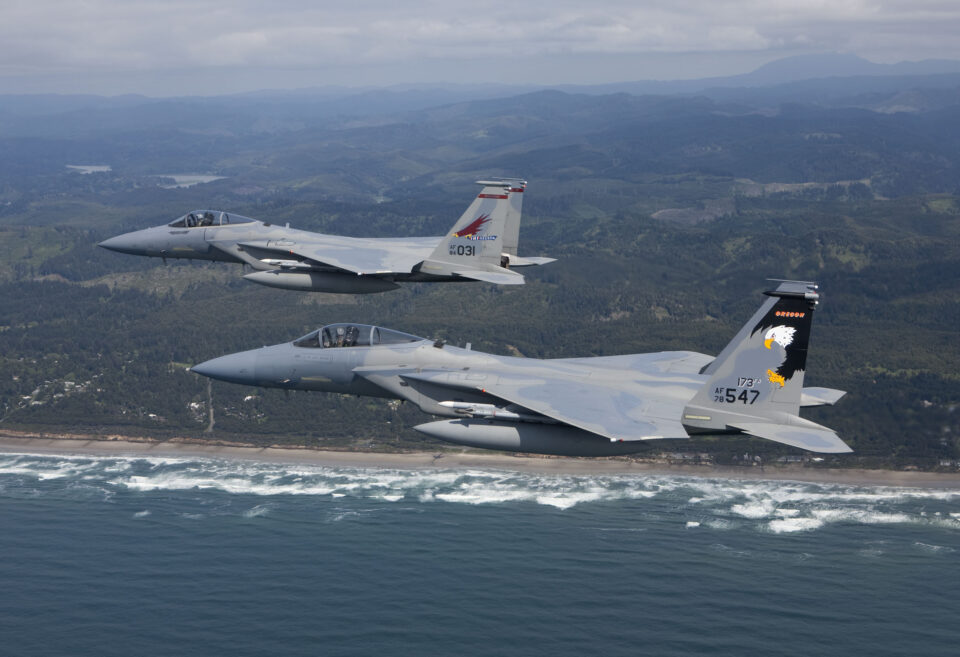 SALEM, Ore. – The Oregon Air National Guard is scheduled to fly multiple F-15 Eagle flyovers over hospitals and other locations throughout Oregon during the month of May in order to salute Oregonians on the forefront of the COVID-19 pandemic and lift morale during a time of severe health and economic impacts.

“This is a joint effort to demonstrate support and give thanks to healthcare workers, first responders, and other essential workers on the frontline of the COVID-19 response; the goal is to unite all Oregonians during this time,” said Stephen Bomar, Director of Public Affairs for the Oregon Military Department. “This effort also demonstrates the full capabilities of our Oregon National Guard Citizen Soldiers and Airmen. Whether on the ground delivering needed Personal Protective Equipment throughout Oregon or in the skies protecting the Pacific Northwest, the Guard is in this together with Oregonians.”

Anyone living in and around these hospitals should see and hear the jets. People are encouraged to view the flights from the safety of their own homes and practice physical distancing.

The flyovers are scheduled for the following locations at the approximate designated times Friday, May 8.

“We are honored to pay tribute to everyone who has served on the frontlines during this pandemic,” said Brig. General Donna Prigmore, Commander of the Oregon Air National Guard.

“This is a small way of showing our gratitude for the big sacrifices that our healthcare workers, emergency responders, and so many others have made. We thank all of you.”

All flyover plans have been coordinated as a part of OPERATION: AMERICAN RESOLVE to salute those at the forefront of the COVID-19 response and will be done in conjunction with regularly scheduled training. Pilots must perform a minimum number of flight hours to maintain proficiency. These flyovers will incur no additional cost to taxpayers and are done in leu of regularly scheduled training.

Additional Oregon Air National Guard flyovers are scheduled to continue next Friday, May 15 with a follow-on press release indicating the flyover locations and times.

The Air Force Salutes flyover plan also includes flyovers from the United States Air Force Thunderbirds demonstration team, which are scheduled to fly over the Pacific Northwest in late May.

All passes are approximately 1,500 feet above ground level at approximately 400 mph airspeed. Flights could be canceled or times changed due to inclement weather or operational contingencies.

Anyone who gets video or photos of the F-15s flying overhead are encouraged to post on social media using the hashtags: #AirForceSalutes, #AFFlyover, #FlyoverFriday, #Inthistogether

The Oregon Air National Guard has been an integral part of the nation’s air defense since 1941. Pilots from the 173rd Fighter Wing and the 142nd Wing train for a variety of mission skill sets in order to maintain combat readiness for the defense of our state and nation. Additionally, the 142nd Wing provides around-the-clock Aerospace Control Alert for the defense of our homeland, while the 173rd FW is home to the sole F-15C pilot training facility for the United States Air Force. Both units also respond to state and national emergencies as directed by the Governor of Oregon.