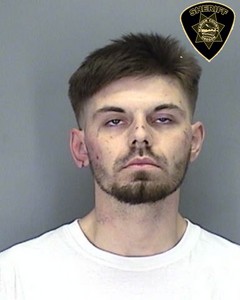 On Saturday, May 16th, 2020, deputies from the Marion County Sheriff’s Office arrested a Salem man wanted in connection with the theft of multiple vehicles from the Salem/Keizer area. The arrest happened after deputies located the suspect, Shayne Rheinholdt, sleeping in a parked vehicle in the parking lot of a local hotel on Fisher Road NE, Salem.

Shayne Rheinholdt, 27, of Salem had been the subject of an investigation by the Marion County Sheriff’s Office involving the theft of several vehicles occurring over a several month period, dating back to September of 2019. During previous attempts to stop Rheinholdt, he is alleged to have fled at a high rate of sped and successfully eluded deputies on multiple occasions.

At the time Rheinholdt was taken into custody, he had outstanding warrants for his arrest for numerous charges including; 7 counts of Unauthorized Use of a Motor Vehicle, 2 counts of Unlawful Possession of Heroin, 2 counts of Attempting to Elude Police, Felon in Possession of a Firearm, Identity Theft, Giving False Information to Police, Recklessly Endangering, and Assault IV.

In addition to the outstanding warrants, Marion County Sheriff’s Office deputies charged Rheinholdt with Unauthorized Use of a Motor Vehicle X 4, Unlawful Possession of Heroin, Possession of Burglary Tools, Attempting to Elude Police X 2, and Theft I. Following Rheinholdt’s arrest, deputies coordinated with investigators from other local agencies who had also identified Rheinholdt as a suspect in additional vehicle thefts.

Sheriff Kast stated, “I appreciate the tenacity our deputies have shown in their efforts to take this suspect into custody safely. Through their willingness to work collaboratively with other local agencies, this one arrest helps bring us one step closer to the resolution of a series of vehicle thefts that have impacted numerous members of our community.”

Rheinholdt has been lodged at the Marion County Jail where he is scheduled to be arraigned today, May 18th, 2020, at 1:30 pm.