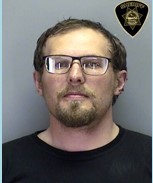 On May 19, 2020, as part of an on-going investigation conducted by detectives, a Keizer Police officer stopped a vehicle operated by Matthew Rouch. The vehicle Mr. Rouch was operating was pulling a trailer that had an ATV on it. Both the trailer and the ATV were later determined to be stolen — fraudulently purchased by Mr. Rouch. Following up, detectives searched a residence in the 4900 block of 13th Ave NE. At the home, detectives discovered an organized identity theft operation. Mr. Rouch was lodged at the Marion County jail for the listed charges. The investigation is continuing.