Pursuit of Stolen Car and Arrest 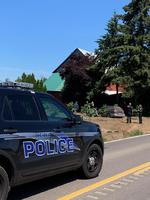 On May 27, 2020, at about 11:30 a.m., a Keizer Police motorcycle officer attempted to stop a green Subaru Legacy near the intersection of 7th Ave NE and Faymar Drive. The driver quickly accelerated, trying to elude the officer. The driver later made a U-turn in a cul-de-sac and sped directly toward the pursuing officer, who was forced to leave the roadway in order to avoid a collision. Other officers joined the pursuit as it continued for several minutes, leaving Keizer. A Gervais Police officer was able to effectively deploy Spike Strips near the intersection of Howell Prarie Road and Mt. Angel/Gervais Highway. The pursuit ended near the area of 12900 Howell Prarie Road NE when the Subaru’s driver drove through a ditch and fled on foot. He was caught and arrested by Keizer Police and members of the Marion County Sheriff’s Office, about 100 yards from the car. He was identified as Christopher Benzel.

The Subaru, which had been reported stolen in March by a Woodburn resident, sustained damage from the crash and was towed from the scene. Mr. Benzel complained of apparent minor pain and was transported by ambulance to Salem Health for an evaluation. He was later transported to the Marion County jail where he was lodged for the listed charges.