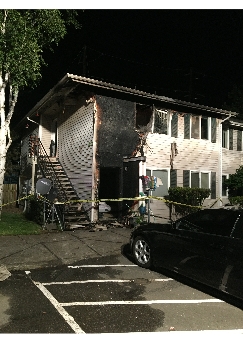 This morning 5/29/2020 at 12:35 AM Marion County Fire District #1 (MCFD1) Engine 315 (E315) was dispatched to a non-structure low risk fire at 133 Stafford Lane NE. Shortly after E315 was dispatched, 911 call takers began to receive multiple reports of an apartment complex on fire at the same address. The alarm was upgraded and additional units were dispatched. E315 arrived first and found a six unit apartment complex with the exterior siding on fire and blocking exits of one ground floor, and one second floor apartment. Occupants of the ground floor apartment were able to escape through windows on the rear of the building, E315’s crew was able to knock down the exterior fire and assist the upstairs occupant down the stairwell. The fire did extend up the exterior siding and entered the attic space. Additional arriving crews were able to confirm no additional occupants in any of the adjoining apartments and extinguish the attic fire. There were no injuries to occupants or firefighters. Red Cross is assisting occupants of two apartments. The fire remains under investigation. MCFD1 responded to the incident with four engines, one rescue, one medic unit, one Battalion Chief and one Fire Marshal for a total of 18 personnel.