Ninth Night of Demonstrations in Portland 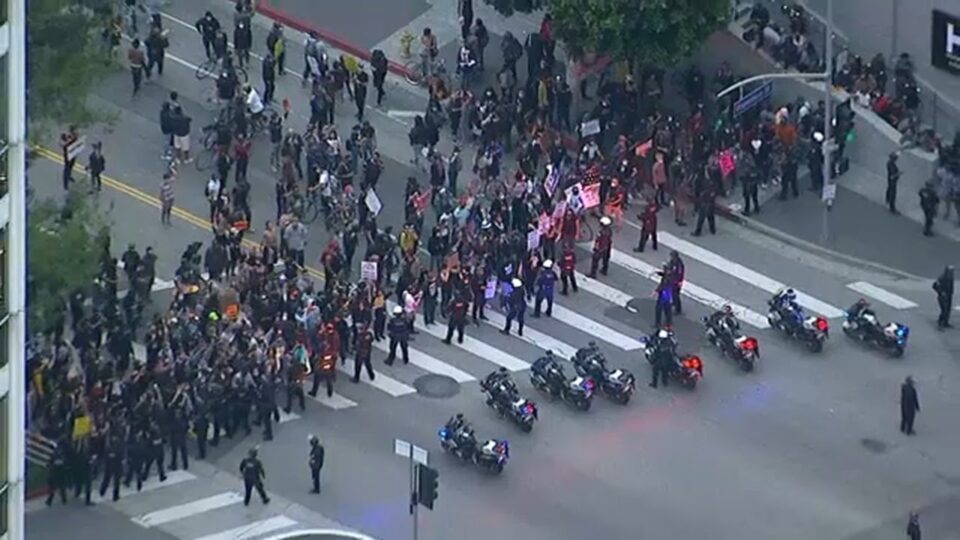 On the evening of June 6, 2020 the City of Portland, Oregon, experienced another night of demonstrations. The evening began much the same as the last several nights with separate groups of demonstrators taking to the streets.

A group formed at 6:00 p.m. gathering at Revolution Hall in Southeast Portland. This group marched north on Southeast Grand Avenue. The march of several thousands continued to Northeast Fremont Street, and headed east to Irving Park. This group gathered peacefully for several hours in the park, and marched back to Revolution Hall where the demonstration ended at about midnight. This was another example of a well-managed demonstration for all involved to exercise First Amendment rights.

Another group began the night at Pioneer Courthouse Square. This group of several hundreds began marching just before 9:00 p.m. through the north park blocks and continued through northwest Portland. The march turned south and moved to the area of the Justice Center, where it merged with the group which had already gathered.

A group of several hundreds formed in front of the Justice Center. Many members of this large group started engaging in criminal behavior just after 6:00 p.m., which escalated as the night progressed. The behaviors included shining laser pointers, Using mirrors to direct light at officers, hurling items at officers over the fence including balloons full of paint, full cans of beverages, attempting to cut the fence, attempting to push over the fence, and lit commercial grade fireworks at officers. The Portland Police issued many orders to stop the criminal behavior, but the actions continued.

At about 10:50 p.m. an unlawful assembly was declared. The crowd was given ample opportunity to disperse and were warned if they did not do so, they were subject to arrest or force. Officers began dispersing the crowd just after 11:30 p.m. Portland Police, assisted by outside agency mutual aid partners, arrested at least 50 subjects for criminal activity. Just around midnight, a commercial grade firework was launched over the fence at the Justice Center, injuring two deputies (Refer to @MultCoSO for details). The rest of the agitators were dispersed close to 2:00 a.m.

Information on arrests is still being compiled and an updated release will be published when this information becomes available. No CS gas was used by Portland Police Bureau members during this event.

“Thank you to the many thousands of Portlanders who demonstrated tonight without violence. Your voice is powerful, and I am with you,” said Chief Jami Resch. “While your actions did not get the attention and coverage of the other events downtown, I want you to know we see you and we hear your message. To all of our Bureau members and mutual aid partners, I am grateful for your continued efforts and service. To my staff, to our partner agencies, and to the many other thousands of people who worked to keep tonight safe, thank you. I have had many conversations with demonstrators and community leaders over this past week. I am inspired and encouraged by their wisdom and their guidance.”