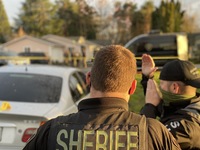 On March 24th, 2021, the Marion County Sheriff’s Office responded to a shooting which occurred in the back parking lot of Four Corners Elementary School in the unincorporated area of Salem.  Two 17-year-old males were found at the scene with gunshot wounds and were taken to a local hospital.  Since the day of the shooting, one of the victims had remained hospitalized with critical injuries.  Tragically, the 17-year-old succumbed to his injuries on Saturday morning, March 27th, 2021.  The second victim who sustained non-life threatening injuries has been released from the hospital.

At the request of the family, the victim’s name will not be released at this time.  As the family continues to grieve the loss of their loved one, they are requesting privacy and no contact from the media.

Detectives from the Sheriff’s Office are continuing to follow investigative leads.  No additional suspects have been arrested or charged in connection with the shooting.  Anyone with information is encouraged to call our tip line at 503-540-8079 or submit information online at https://www.co.marion.or.us/SO/Pages/tip411.aspx.  Due to this being an open and ongoing investigation, no additional information is available for release.

On March 24th, 2021, at approximately 4:19 p.m., 911 callers reported hearing shots fired in the area of Durbin Ave SE at Wiley Ln SE in the unincorporated area of Salem.  Two victims with gunshot wounds were located in the back parking lot of Four Corners Elementary School when deputies arrived.  Medics from Marion County Fire District #1 transported both victims to a local hospital for treatment.

Investigators remained at the scene for several hours searching for evidence and canvassing the area.  Initial information lead investigators to believe this shooting occurred during a suspected marijuana deal.

The two shooting victims have been identified by investigators; their names will not be released due to being minors.  The first victim, a 17 year old male, is currently in critical condition.  The second victim, also a 17-year-old male, sustained non-life threatening injuries.

Two additional 17-year-old juvenile males were detained in the area and one gun was recovered.  One of the juveniles was charged with Robbery in the First Degree, Unlawful Possession of a Firearm, Unlawful Use of a Weapon and Theft in the First Degree.  The other juvenile was released to their parents.

Investigators are seeking community tips which may help identify additional suspects involved in the shooting.  Tips can be submitted online at https://www.co.marion.or.us/SO/Pages/tip411.aspx or by calling our tip line at 503-540-8079.