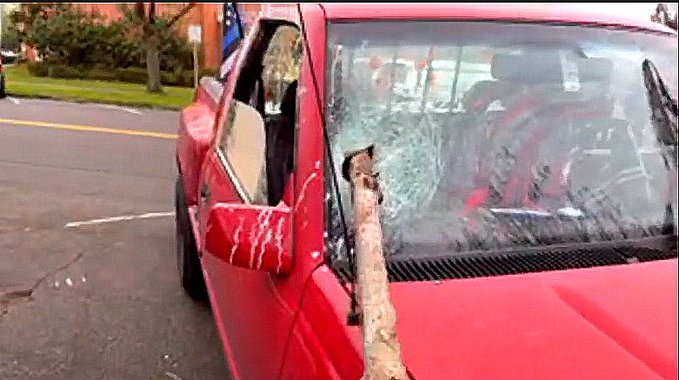 Salem, Ore. — Oregon’s state capitol continues to be a draw for demonstrations and protestors. On Sunday, March 28, 2021, events were held by two separate groups intending to meet at the state capitol grounds.

Soon after their arrival, the Salem Police department began to receive reports that individuals from the Court Street group were targeting vehicles driving by. The victims reported their vehicles were damaged by paint filled balloons, rocks and other hard objects being thrown at them as they passed. One vehicle sustained significant damage after a large tree limb was thrown through the front window into the vehicle’s passenger seat. Patrol officers responded and took several reports to initiate criminal investigations.

Due to the ongoing reports of criminal activity, Court Street was closed. Doing so allowed Oregon State Police and Salem Police crowd management teams to respond to the area and declare the gathering on Court Street an unlawful assembly. The closure also deterred the Freedom Rally caravan from entering the area. Audible announcements to disperse were given to the crowd on Court Street. The teams successfully removed the individuals onto the capitol mall. No force was used as the individuals complied with commands. The Oregon State Police teams returned to the capitol building area.

The dispersed crowd, however, began to move about the various streets surrounding the capitol grounds. Several altercations and property damage were reported including a reported incident of paintball guns being used, and a firearm displayed. During the arrest of two suspects, officers used less-than-lethal rounds in their apprehension.

The following individuals were arrested and lodged at the Marion County Correctional Facility on charges related to criminal activity during today’s event:

These are open criminal cases and will continue to be investigated.  Anyone with information related to these incidents or any other criminal acts which took place on Sunday, March 28, are encouraged to contact the Salem Police Department tips line at 503-588-8477.