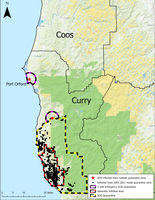 CORVALLIS, Ore. – Tests on tanoaks trees found dying of sudden oak death near Port Orford show the particular variant they are infected with has not been seen before in the wild. For more than a decade the NA2 variant of sudden oak death has popped up from California to British Columbia as well as Oregon, but so far only in nursery stock.

“The site near Port Orford appears to be the first on the West Coast where the variant has been identified in samples collected from wild trees,” according to Niklaus Grunwald, PhD, with USDA Agricultural Research. He collaborated with Jared LeBoldus, PhD, at Oregon State University’s Forest Pathology Lab in Corvallis to do the DNA testing which identified the variant in samples from the Port Orford tanoak trees.

A different strain of sudden oak death – the NA1 variant – has been killing tanoaks in Oregon since the disease was first discovered in Oregon in 2001. A European strain – the EU1 variant – was first found in Oregon in 2015. It turned up in wild tanoak trees this spring at a site in the Rogue River-Siskiyou National Forest, just across the Rogue River from the current sudden oak death quarantine boundary. Trees at that site have since been cut and piled ready for burning.

Treatment at the site where the NA2 variant was found is expected to take place in June. All tanoaks within a set distance of trees known to be infected will be cut and piled for burning, with the goal of eradicating sudden oak death from that location. That site is along Highway 101, about 21 miles northwest of the existing quarantine zone and a mile from Port Orford.

SOD crews from Oregon Department of Forestry and the USDA Forest Service are continuing to heavily monitor both areas for the presence of trees and plants infested with Phytophthora ramorum, a water mold that causes sudden oak death. Both areas will also be monitored by aerial disease survey experts, with helicopter flights over northern Curry County planned.

It is not known how the NA2 variant escaped into the wild. Although this is the first report of the NA2 variant being found on trees in nature, Oregon has been vigilant about monitoring and testing and is actively trying to slow the spread of sudden oak death, which 20 years after discovery is still confined to Curry County. By contrast, sudden oak death is now reported in forests in every coastal California county from the Oregon border to Monterey.

The invasive non-native pathogen that causes the sudden oak death (SOD) in tanoak was first detected in Oregon in 2001. A plant quarantine of the area was promptly set up, which has gradually expanded to cover almost a third of Curry County. When attempts to eradicate the disease – which can survive on several native and non-native plant species – proved impossible, Oregon’s SOD program switched to slowing the spread of the disease.

In Europe, the EU1 strain of P. ramorum has been found to damage and kill several conifer species, including Douglas-fir, western hemlock, grand fir, and larch. That strain was first found in Oregon in 2015 within the existing quarantine area. Infestations of the EU1 strain are aggressively treated with the goal of local eradication.