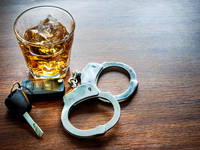 On January 22, 2022 at approximately 7:40 a.m., the Keizer Police Department responded to a vehicle crash in the 5600 block of Trail Ave NE. Officers arrived and conducted an investigation which led to the arrest of 41 year-old, Andrew Modine of Keizer.

It was determined that Mr. Modine was traveling east on Lockhaven Dr NE before his vehicle left the roadway and drove up onto a landscaped area in the 700 block.  The vehicle re-entered Lockhaven and veered onto Trail Ave NE where it once again left the roadway and struck a power pole before careening into the home located at 5695 Trail Ave NE.  Two individuals were located in the home; 63 year-old George Heitz and 67 year-old Moira Hughes.  Mr. Heitz was transported to the Salem Hospital Emergency Department with serious injuries but is in stable condition.  Ms. Hughes was pronounced deceased on scene.

Mr. Modine is currently lodged at the Marion County Correctional Facility on the following charges:

This case has been sent to the Marion County District Attorney’s Office.  Future inquiries should be directed to their office.