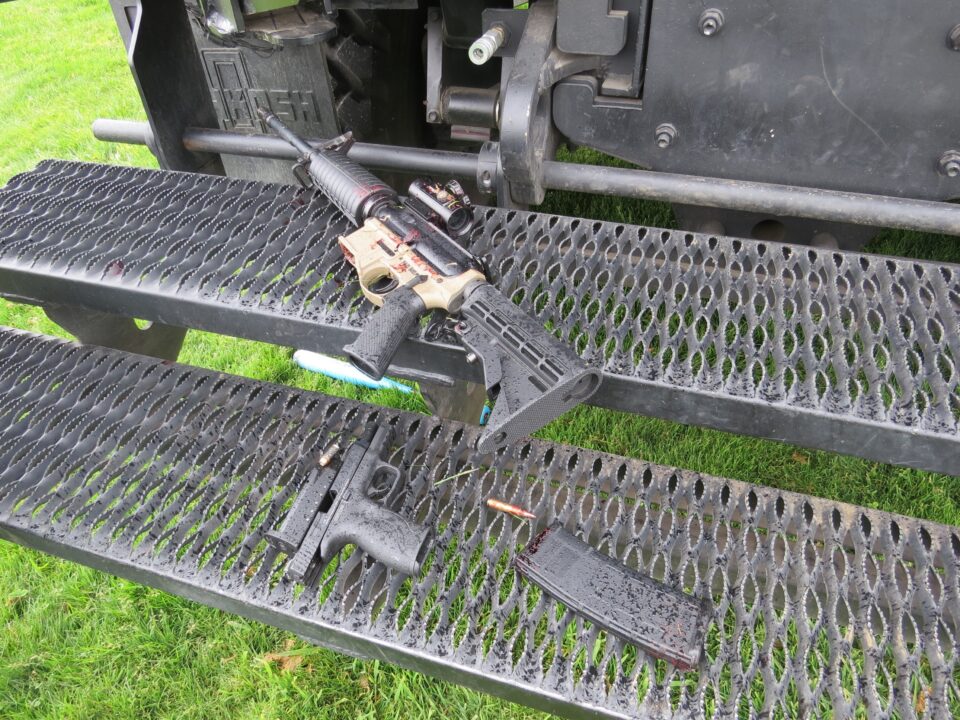 Today, a Marion County Grand Jury unanimously found that the police shooting of Micaiah Clinton (27), on April 25, 2022, was a lawful and justified use of deadly force.

On that day, at approximately 6:15 a.m., Deputy U.S. Marshall Jason Fitzpatrick requested deputies respond to the Flying J Truck Stop near Aurora after he spotted Micaiah Clinton in the parking lot. Deputy Marshal Fitzpatrick knew Clinton had a federal warrant for a bank robbery probation violation and state warrants for Felon in Possession of a Firearm and Eluding a Police Officer. Additionally, Deputy Marshal Fitzpatrick was aware that Clinton had told his probation officer that he would no longer abide by the conditions of his probation and that he “would never go back to prison.”

When Deputy Marshal Fitzpatrick and members of the Marion County Sheriff’s Office attempted to contact Clinton he barricaded himself in his van in the northwest corner of the truck stop’s parking lot.  Deputies then boxed in Clinton’s van and placed spike strips under its tires to prevent him from fleeing.  They then began to “loud hail” Clinton, telling him that he was under arrest and urging him to surrender peacefully.

When these efforts proved unsuccessful, the Marion County Interagency SWAT Team responded to the scene.  Over the next several hours, tactical negotiators with the SWAT Team attempted to convince Clinton to surrender and to exit the van without weapons and with his hands up.  After those efforts failed, gas munitions were introduced into Clinton’s van without any apparent effect on Clinton.

At approximately 10:50 a.m., Clinton suddenly exited his van wearing a gas mask, body armor and a badge proclaiming to be a “Sovereign Citizen.”  Clinton was also armed with a 223 assault rifle, loaded with armor piercing ammunition.[1] Immediately after exiting the van, and without warning, Micaiah Clinton shot Woodburn Police Officer Jesse Ponce, a member of the Marion County Interagency SWAT Team, in the left upper thigh.  Though the first shot knocked Officer Ponce to the ground, Clinton continued to shoot at Officer Ponce, striking him in his right lower leg. Clinton also fired a shot that struck Officer Ponce’s ballistic shield, another that struck the pistol that was on Officer Ponce’s right hip and four more rounds that went into the police car that was immediately behind Officer Ponce.

After Micaiah Clinton shot Officer Ponce, he began shooting at Marion County Deputy Sheriff Tyler Morrow, a member of the Marion County Interagency SWAT Team, as he came to Officer Ponce’s defense.  Clinton fired six rounds into the back platform of the SWAT vehicle as he attempted to shoot Deputy Morrow.  Deputy Morrow returned fire, striking Clinton three times, once in the head and twice in the chest, killing him.

Officer Ponce was transported to Legacy Emanuel Hospital where he underwent a total of three surgeries.  He is expected to fully recover.

Marion County District Attorney Paige Clarkson stated, “This case is an example of the dangerous work our law enforcement officers do every day.  There is no doubt that Officer Ponce’s and Deputy Morrow’s heroic actions saved lives, and that Mr. Clinton would have killed Officer Ponce and others had he not been stopped.  I am grateful to the grand jury for their time and work on this case.  My thoughts and prayers are with Officer Ponce as he recovers from his injuries.”[2]

[1] Micaiah Clinton was also armed with a loaded .40 caliber handgun.  He also had two additional loaded magazines for the AR and two more for the pistol.

[2] This is a link to 2 videos of the incident and 7 photographs of the scene and Micaiah Clinton’s guns, ammo, body armor, “badge” and gas mask: https://drive.google.com/drive/folders/15QSVGgvPaKXh9ZImyos6yYAkSRfTY3-l?usp=sharing