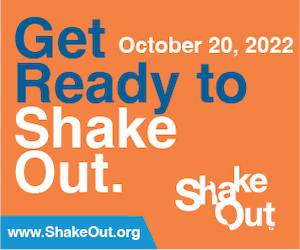 Practice Drop (or Lock), Cover and Hold On to reduce risk during an earthquake

SALEM, Ore. – Oct. 13, 2022 — Earthquakes can strike any time without warning, as many Oregonians experienced last Friday when a magnitude 4.4 quake occurred in Linn County. When the earth starts to shake, people need to know how to best protect themselves. The Great Oregon ShakeOut is part of a global drill for people to practice how to stay safe during an earthquake. Nearly half a million Oregonians have registered to take part in this year’s self-led Great ShakeOut drill at 10:20 a.m. on Oct. 20, pledging to Drop, Cover and Hold On for at least 60 seconds as if a major earthquake was occurring at that moment.

“The earthquake that struck Linn County last week rattled some folks and was a wake-up call that we live in earthquake country,” said Oregon Emergency Management (OEM) Director Andrew Phelps. “Knowing what to do when the earth starts shaking helps people reduce their risk and better protect themselves to prepare for earthquakes. Every person in Oregon should practice Drop, Cover and Hold On until it becomes a familiar routine. It’s an effective and no-cost addition to your preparedness plan.”

Emergency management experts and official preparedness organizations like the United States Geological Survey (USGS) all agree that Drop, Cover and Hold On is the appropriate action to reduce the chance of injury from falling objects and flying debris during earthquakes. When shaking begins or an earthquake alert is received on a cell phone:

Those with mobility disabilities may need modified actions to the traditional Drop, Cover and Hold On approach, but the premise is the same: Immediately protect oneself as best possible, shielding the head and chest and staying in a safe position until the shaking stops. Earthquakes may be so violent that it’s impossible to walk, crawl, or steer a wheelchair, and people may be knocked to the ground when shaking starts. Those who use a walker, wheelchair or have other mobility impairments are urged to lock any wheels; bend over and cover the head and neck with arms, a book or a pillow; and hold on until the shaking stops.

Oregon averages around 70 earthquakes a year; 15 of those are large enough to be felt. Most are crustal quakes that occur at relatively shallow depths. However, the Cascadia Subduction Zone (CSZ) – a 600-mile fault located off the Pacific coast shoreline – puts Oregon at risk for a 9.0+ magnitude earthquake. A Cascadia quake could cause up to four minutes of shaking or rolling, followed by a tsunami of up to 100 feet in height that will impact the state’s coastal areas.

“A Cascadia quake will devastate the entire Pacific Northwest region, impacting critical infrastructure like energy, drinking water and sewer services, transportation routes and lifesaving health-care facilities for weeks to months or longer,” said Phelps. “Knowing this makes it even more important to build a culture of preparedness in the state. Half a million Oregonians practicing earthquake preparedness at the same time is impressive, but it’s not enough. We need to work toward every Oregonian registering for the Great Oregon ShakeOut as an important step toward keeping themselves safe in the event of a Cascadia quake.”

Additional simple and effective no-cost and low-cost measures people can take to prepare for an earthquake include securing their space by identifying hazards and securing moveable items, signing up to receive local emergency alerts and enabling Wireless Emergency Alerts (WEA) on cell phones. People in Oregon, Washington and California who’ve opted into WEA automatically receive ShakeAlert earthquake early warnings notifications (for quakes in their area with a magnitude of 4.5 or greater), which can offer critical seconds of warning to seek cover from falling objects and brace themselves.

There are currently two ShakeAlert-powered apps available for download on the app stores: QuakeAlertUSA and MyShake. Those who have the MyShake app will receive a TEST alert at 10:20 a.m. on Oct. 20 for the Great Oregon ShakeOut.

OEM recommends people in Oregon be informed and knowledgeable about the hazards where they live and have an emergency plan and enough food, water and supplies to survive for at least two weeks following any disaster. The agency’s 2 Weeks Ready program offers several resources in multiple languages to help people prepare.

Learn more about the Great Oregon ShakeOut and register as a participant at Shakeout.org/Oregon.

You can get this document in other languages, large print, braille, or a format you prefer. For assistance, email oem_publicinfo@oem.oregon.gov. We accept all relay calls, or you can dial 711.

Image Caption: An illustration of how to Drop, Cover and Hold On (courtesy The Great ShakeOut).

Image Caption: An illustration in Spanish of how to Drop, Cover and Hold On (courtesy The Great ShakeOut).

Image Caption: Get Ready to ShakeOut banner in Spanish (courtesy The Great ShakeOut).